In case you haven’t heard, the Royal Baby has been born.

Of course, the news has been nearly impossible to avoid. Just about every news source with a web address has reported on Kate Middleton and the royal baby. Hundreds of reporters have been staked out at the hospital and Buckingham palace and this guy screamed the announcement so loud that #royalbaby immediately started trending on Twitter.

The arrival of the royal baby has consumed social media sites like Twitter. “Kate Middleton,” “#Royalbaby,” “Buckingham Palace” and “Duchess of Cambridge” currently hold the top four spots on the social media platform. 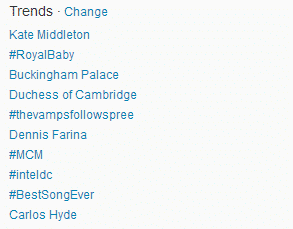 The internet has also lit up with photos of… well, nothing really. No one has seen Kate Middleton or the royal baby yet but there is a fancy sheet of paper hanging outside of Buckingham Palace.

Here are some more photos of the earth shattering event.

The royal baby may be the one making all of the headlines today but really, this guy is the star of the show.

PHOTO: A town crier announces the birth of the #royalbaby outside St Mary’s Hospital (via @GettyImages) pic.twitter.com/oEdL02XnTU