George Zimmerman is having the best week ever. Not only was he found “not guilty” of killing Trayvon Martin by a jury of his “peers” this weekend, George Zimmerman won the lottery in Florida!

That is, if you didn’t realize you were reading The Onion.

A handful of publications were duped by the paper’s biting satire, including The Examiner and The Tampa Star, but good luck finding those articles now.

Everyone seemed to quickly realize their mistake, but not before the sensational headline made MSN trends, which, as we’ve discovered, is sometimes prone to silly trend stuff.

But some folks on social did not get the memo. The Star’s posting generated more than 130 “likes” on Facebook, with comments like “It is terrible that this is being posted.”

There were even people who saw the link on The Onion’s own freaking Facebook page and totally bought it. 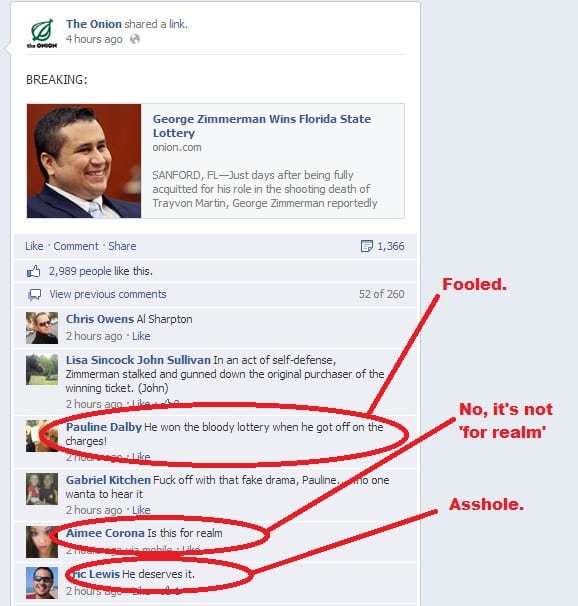 Twitter users already had their thinking caps on, and were rightly skeptical of the story immediately.

Its funny how people really believe that zimmerman won the lottery. Its all a fake. Lol theonion is a parody news site.

That’s a Rumor. It ain’t tru RT @Ducky_Jai: So George Zimmerman Won The Lottery?? For 37 Mil

But there were a few believers:

wait….you mean to tell me Zimmerman really won the lottery?! or am I getting trolled…

Did you believe that George Zimmerman won the lottery? If you know anyone who does, share this article. Here are ten people who bought it: