Should Alec Baldwin Be Punished Paula Deen-Style For Anti-Gay Tweets? 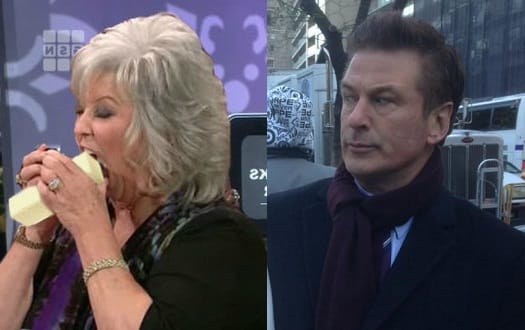 Should actor and infamous tantrum-thrower Alec Baldwin be publicly punished a la Paula Deen for his gay bashing Twitter rant?

Some activists think so, and are calling on Capital One to drop the 55-year-old, comparing his anti-gay comments to Deen’s use of the odious “N-word.”

Oh, here’s a twist: These “activists” are conservatives.

Some context: A little over a week ago, Baldwin snapped on a Daily Mail reporter who wrote an unflattering (and untrue) article about his wife. He threatened the reporter on Twitter, calling him a “toxic little queen,” and saying that he was going to put his foot up the guy’s ass.

Interestingly, this tirade was also Alec Baldwin’s last act on Twitter. He shut down his account for good a few days later.

His tweets have been called anti-gay and homophobic, and have started a conversation about how we “punish” our celebrities for the nasty things they say.

Gay-supporting conservatives are now saying that Baldwin should be punished much like Paula Deen has been punished: By hitting him in the wallet.

“It’s still a free country and Alec Baldwin can do as much gay bashing as he likes on Twitter, but it’s hard to understand why Capital One would choose to publicly condone his homophobia by keeping Baldwin on as its spokesman,” John Hawkins from RightWingNews.com said.

“If Capital One is not going to do the right thing, then Capital One doesn’t deserve our business.”

Jimmy LaSalvia, a gay conservative and GOProud co-founder said, “We urge all Americans to ask themselves, ‘What’s in your wallet?’ We hope they will reject Alec Baldwin’s homophobia by cutting up those Capital One cards in their wallets.”

To be fair to Alec Baldwin, he did issue an apology for his comments directly to the Gay and Lesbian Alliance Against Defamation (GLAAD).

“My ill-advised attack on George Stark of the Daily Mail had absolutely nothing to do with issues of anyone’s sexual orientation,” he wrote.

“My anger was directed at Mr. Stark for blatantly lying and disseminating libelous information about my wife and her conduct at our friend’s funeral service.”

They accepted his apology, too.

It’s kind of a tough issue that leads with a lot of tough questions. Is all hate speech created equal? Is using homophobic language as bad as using racially charged language? Is there a difference between using hateful language because you’re a hateful person, and using out of anger?

Should Alec Baldwin be “punished” like Paula Deen for his supposedly anti-gay tweets? Are the two situations even similar? We’re leaving this one to you, folks.