‘Timebomb’ Tweet Taken Out Of Context Gets Teen Arrested [Video]

Normally we’re huge “be careful what you tweet” type people, but a recent arrest over a “timebomb” tweet has us scratching our heads some.

A teenager is facing criminal charges after he inadvertently set off a bomb scare at a Pink’s Sunday night concert at Rod Laver Arena in Australia. The 16-year-old was tossed out and arrested for this: 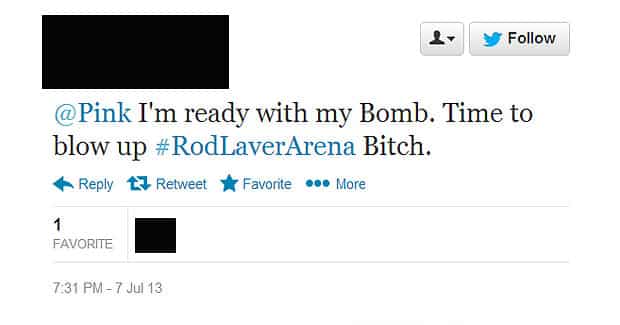 Which is a reference to Pink’s pop hit “Timebomb.”

Because it was hashtagged #RodLaverArena, officials picked up the “Timebomb” tweet and searched for the teen in the audience using his own profile picture.

‘‘They just came up to me and showed a photo and said ‘is this you?’,” he recalled. ‘‘I said yeah, because it was my face, and suddenly they just turned me around and grabbed my hands and forced me out the back.”

He explained that it was innocently intended as a reference to the song, and that he is not a terrorist.

“It was meant to be about drop the effects, the music, everything – just drop it all.”

Though the it was obviously a stupid, not-very-well-thought-out tweet, authorities weren’t content to let the teen off with a stern warning. Instead, the arena doubled-down on him. He was arrested and charged with being a public nuisance.

A spokeswoman for the venue said:

“We can’t risk not taking matters like this seriously. From our point of view, we have systems in place to monitor social media to ensure the safety and security of the venue, of guests and performers. Our security staff acted to ensure the area was secure and handed the matter over to the police.”

As many as 20 security officials approached the teen for his “Timebomb” tweet. The arresting officer opined that “if it was up to me, I would have booted him in the backside and said go home.”