Alec Baldwin has been inspired to quit Twitter after listening to speeches at James Gandolfini’s funeral and realizing that you don’t need 140 characters or less to make a difference in this world.

The actor was among celebrity mourners in New York City last Thursday gathered to honor the Sopranos star who died in Italy last month. Citing Gandolfini’s impact on the world without ever having used social media sites like Twitter or Facebook, Baldwin decided to hang up his @ABFalecbaldwin handle for good.

In an interview with The Gothamist, Baldwin explained:

“I learned a lot when I was at Jimmy’s funeral… One thing about Jimmy Gandolfini was that he wasn’t on Twitter… He went and did his work, he put his energy into his work. And what I realized was that these social media things… Twitter and Tumblr and Vine and Instagram and Facebook and Myspace, all these things… that we were all told we had to have, and what we’re realizing is that no you don’t! No you don’t. All this energy goes into these things, and for what?…

“I’m sitting there at Jimmy’s funeral… and this stuff really is kind of superfluous… I realized… it certainly isn’t worth the trouble.”

Baldwin deactivated the account shortly after the funeral, though he didn’t mention to Gothamist whether his decision to quit Twitter for good had anything to do with the nasty row he got into with a Daily Mail reporter. Said reporter doesn’t understand time zones (or doesn’t care) and wrote an article critical of Baldwin’s wife, accusing her of tweeting on her phone during the funeral.

Baldwin lashed out in an epic rant, and deactivated his Twitter shortly thereafter. Will he ever re-activate it?

“Everybody in the business just admires him as an actor. He didn’t think to himself, ‘Man, I gotta have a Twitter, I gotta be Twittering.’ I thought, ‘You know something? I’m gonna take a lesson from Jimmy Gandolfini.’ This media thing is a complete waste of time.”

For those of you following Alec Baldwin’s wishy-washy relationship with social media, this is the third time he has come to such a conclusion.

In December 2011, he left without a word after he was “reamed” out by an American Airlines flight attendant for refusing to turn off his cell phone during a flight. He returned in January, with a brief “Back on Twitter” posted to his @alecbaldwin account.

After marrying Hilaria Thomas last summer, Baldwin abruptly quit Twitter for a second time. He posted the following message before deleting his account for good: 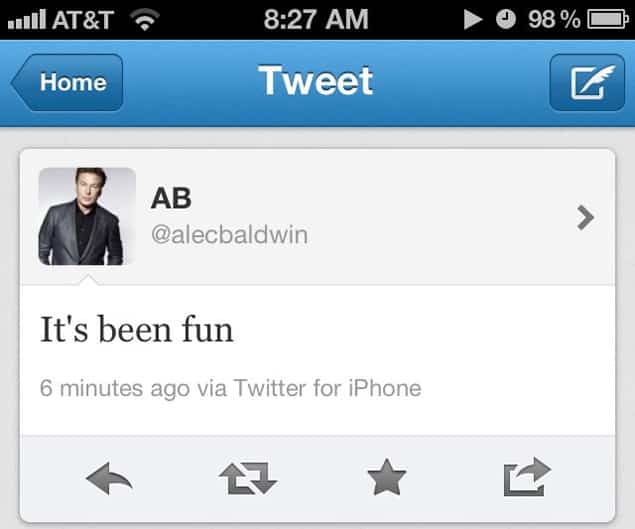 He then started “cheating” by tweeting through his Alec Baldwin Foundation handle, originally used for his non-profit organization which supports “the arts and artists, amateur and professional.” He pretty much hijacked it and turned it into his own Twitter account. It’s unclear whether or not the account will still be used for ABF stuff.

Do you think Alec Baldwin can quit Twitter for good?