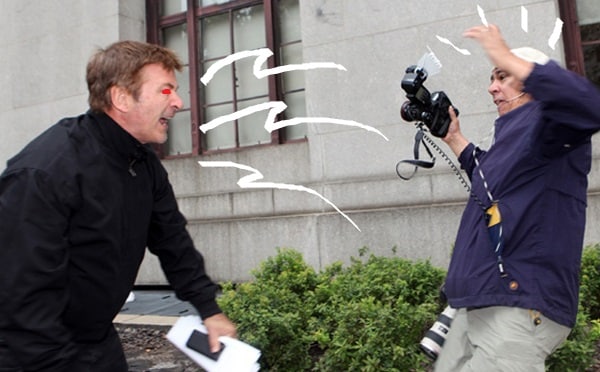 Actor and expert tantrum-thrower Alec Baldwin went on a nasty Twitter rant on Thursday, all targeted at a Daily Mail reporter who made some unsubstantiated claims about his pregnant wife, Hilaria Baldwin.

The Baldwin duo were in attendance at James Gandolfini’s funeral on Thursday to pay their respects to the Sopranos star, and an online report from Daily Mail’s George Stark suggested that Hilaria had been tweeting during the service.

Per Stark’s unflattering portrayal of Hilaria:

“The pregnant yoga instructor’s social media feed was full of upbeat posts while The Sopranos star’s friends, family and co-stars were gripped with grief at a New York Catholic church. Messages included a request for ideas about wedding anniversary presents and promotional notes about her upcoming appearance on the Rachael Ray show.”

Baldwin initially shot back a dry “Someone wrote that my wife was tweeting at a funeral. Hey. That’s not true. But I’m gonna tweet at your funeral.”

But later followed up with a series of tweets calling Stark a “toxic little queen,” “a lying little b—-” and threatening to “put my foot up your f—— ass, George Stark, but I’m sure you’d dig it too much.”

He also attempted to clarify his wife’s behavior during the funeral, writing:

“My wife and I attend a funeral to pay our respects to an old friend … How much of this s— are people supposed to take? With these f—ing blatant lies every day. My wife did not use her phone, in any capacity, at our friend’s funeral. Now, f— this Twitter + good luck to all of you who know the truth.”

Baldwin’s page was then taken offline, but it’s unclear whether he did it himself or if he was flagged into the penalty box.

Hilaria, meanwhile, has also attempted to clear up the confusion on Twitter.

Today was supposed to be about remembering a friend, loving each other, treasuring life, moving fwd w more appreciation for our fragility

She also defended her husband:

My husband fights for me fiercely. It hurts to be misunderstood and it hurts to see your loved one in pain-even more so when she is pregnant

Other celebrities and tweeps stepped up to defend Hilaria from Stark’s Daily Mail report, and an article at showbiz411 chalks up the story to time zone confusion, which would make Stark’s report pretty libelous.

In any case, Stark’s byline has been removed from the original story.

What do you think of Alec Baldwin’s rant against George Stark? Deserved, or offensive?