We know Chick-Fil-A’s founder hates gays, we just didn’t realize that Dan Cathy can’t stand fully behind his own convictions. The fast food restaurants founder, angered over the Supreme Court’s ruling on the Defense of Marriage Act (DOMA), sent out a tweet in which he suggested that the decision will destroy society.

While the original tweet has since been deleted we have the screenshot: 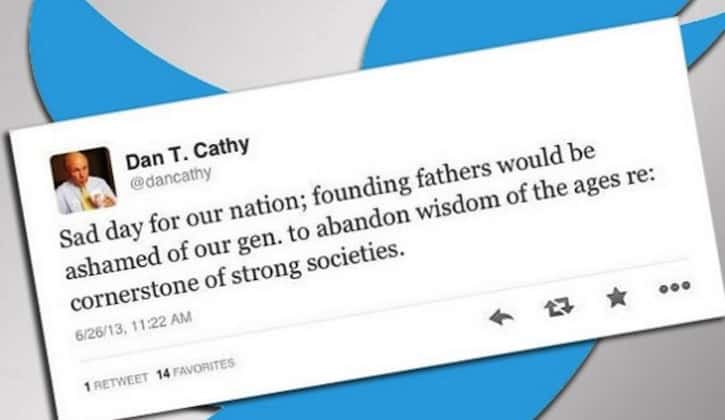 You will probably recall that last summer Chick-Fil-A drew plenty of controversy when Cathy claimed gays shouldn’t be married because of “the biblical definition of a marriage.” Later Cathy declared:

“I think we are inviting God’s judgment on our nation when we shake our fist at him and say, ‘We know better than you as to what constitutes a marriage.’ “

As the company has done in the past Chick-Fil-A was forced to release the following statement on Friday after the tweet was deleted:

“Dan recognizes his views do not necessarily represent the views of all Chick-fil-A customers, restaurant owners and employees, so he removed the tweet to eliminate any confusion.”