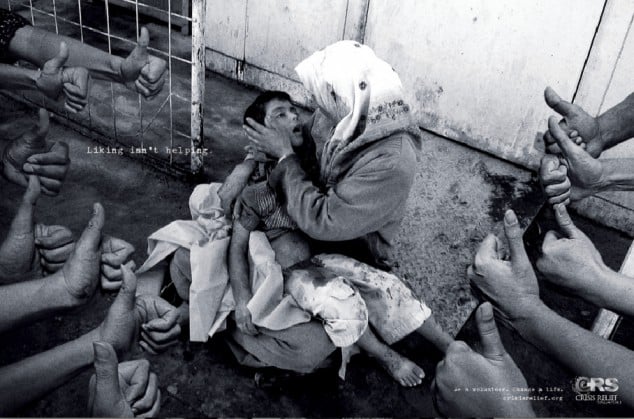 Remember when millions of people shared and liked the hell out of KONY 2012, and it didn’t really accomplish much aside from sending its creator into a naked mental breakdown? That’s kind the point behind Crisis Relief Singapore’s ad campaign “Liking isn’t helping.”

It’s a powerful campaign that mocks the “guilt-assuaging cult” of Facebook “likes,” blasting the empty gesture with shocking images of children in pain while dozens of hands offering a “thumbs up” surround them.

The images are as inspirational as they are heart-breaking, with a powerful and direct “Be a volunteer. Change a life,” at the bottom of each photo.

Now, this campaign could ruffle some feathers. Social fans who continue to trumpet the power of social media though we are, we do suggest using Crisis Relief Singapore’s campaign as an opportunity to start a real discussion about what social can and cannot do.

While the power of social media is both growing and unquestionable, “liking” and even sharing a Facebook post doesn’t put food in the mouths of starving children, nor does it unseat powerful Ugandan warlords.

What it can do is spread awareness, but awareness doesn’t necessarily translate into action, and this is the root of the “Liking isn’t helping” campaign’s message. Most importantly though, what social media can do is bring like-minded people together into communities that actually do some real good through public support, donations, or even disseminating news and communication between said communities.

We’ve already seen social media used to great success in disaster relief efforts here in the U.S., so we know that it can have a direct and positive impact on bettering people’s lives.

So, sharing a video everywhere about the crimes of Joseph Kony doesn’t solve any problems. True! Probably only a bullet solves that problem.

But, sharing a link to a Red Cross donation site after a tornado hits Oklahoma so that people can donate to families in need does solve problems. And social is used for that.

It’s a conversation we need to start having.

Here’s a final image from “Liking isn’t helping.” Start the discussion below!