Rep. Winkler Tweet’s About ‘Uncle Thomas’ And Then Apologizes For...

Rep. Winkler tweeted an extremely offensive message to Supreme Court Justice Clarence Thomas on Tuesday and the original message along with his apology have taken the top spot as this years worst social media fail.

Angered over Thomas and the courts 5-4 votes against a key provision of the Voting Rights Act (VRA), Ryan Winkler took to Twitter to tweet: 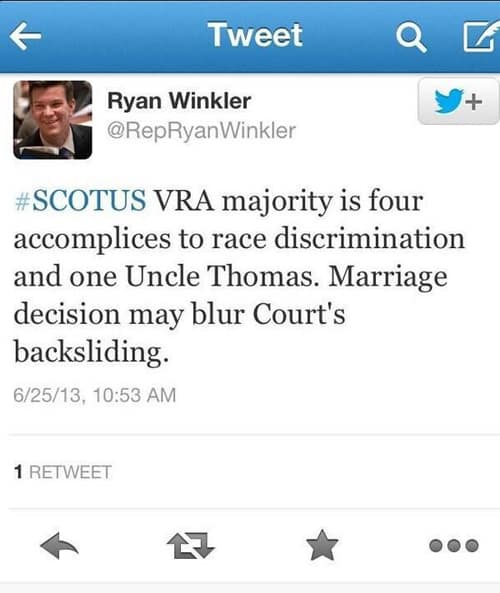 As expected the “Uncle Thomas” reference and its closeness to “Uncle Tom” didn’t go over well and led to Rep Winkler tweeting the following messages:

And if Virginia wants a battle flag back from their war to defend slavery, they can march to Minnesota and take it.

The VRA is maybe the most important step our nation has taken to eliminate racial discrimination. It gives meaning to the 15th Amendment. — Ryan Winkler (@RepRyanWinkler) June 25, 2013

The #SCOTUS decision today is the progeny of Nixon’s use of race to win political majorities and the states’ rights doctrines of Rehnquist.

I didn’t think it was offensive to suggest that Justice Thomas should be even more concerned about racial discrimination than colleagues.

But if such a suggestion is offensive, I apologize. — Ryan Winkler (@RepRyanWinkler) June 25, 2013

@atrupar I did not understand “Uncle Tom” as a racist term, and there seems to be some debate about it. I do apologize for it, however.

Do you think the Rep. Winkler Tweet is highly offensive and likely to hurt his political career?