Jackie Chan isn’t dead, just (again) a victim of a death hoax. The 59-year-old actor cleared up rumors of his fictional passing with a photo and an update on his health on Facebook.

“At about 11am on Wednesday, our beloved actor Jackie Chan passed away. Jackie Chan was born on April 7, 1954 in Hong Kong. He will be missed but not forgotten.”

The page failed to pick up any real traction, especially after the International Business Times quickly intervened to flying-bird-kick the rumor in its weak little balls.

But the death hoax rumor continued, with the Internet sewage processing conglomerate Global Associated News running a story reporting that Chan had died in Austria while shooting a film. He had apparently fallen to his death in a remote, mountainous area.

GAN has a reputation for making up outlandish celebrity death stories for unknown reasons. Probably trolling.

Anyway, Chan’s assistant released a statement confirming that the actor is still alive. But Chan himself decided to take to Facebook to dispel the rumors of his unlikely death personally. 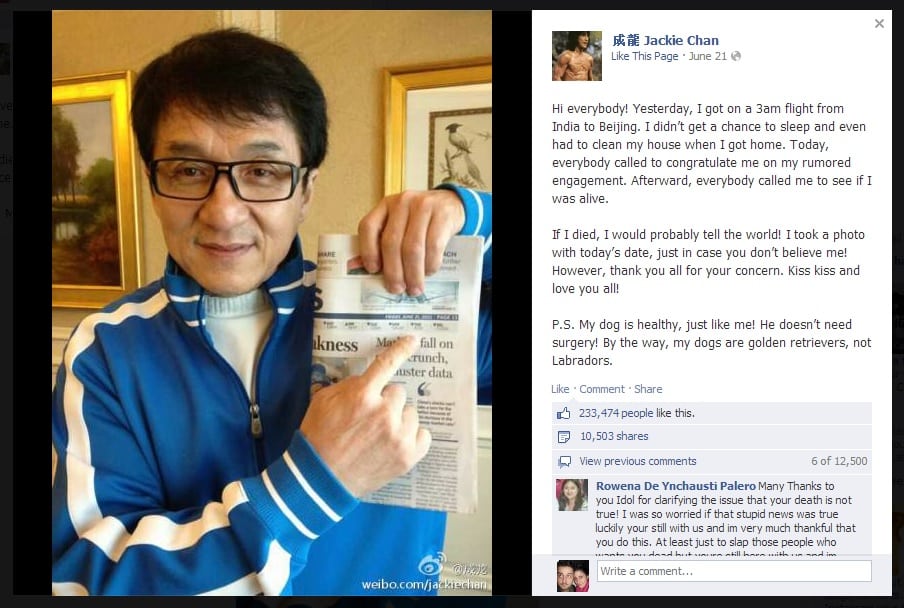 On a related note, I’d actually like to take a moment to applaud you, the audience, for picking up the learning curve on the death hoax phenomenon so quickly.

Death hoaxes have long been a pageview whipping boy for online media publications, but there was a time not too long ago when people actually bought them and shared false reports and condolences on social media in the millions.

Death hoaxes probably reached their nadir (during which the greatest number of people believed the lie) in 2012 with the now-infamous Morgan Freeman death hoax, which I covered for The Inquisitr.

Shortly after, my colleague Dan Evon wrote (so far as I know) the only Internet guide for spotting a celebrity death hoax. It’s a great piece which you can read here.

Anyway, I say all that to say that an increasing number of you are checking the source and thinking before you share. You’ve shortened the shelf life of the celebrity death hoax, which once dragged down the media for days at a time, to less than 12 hours, and in most cases 6 with your diligence.

For example, most recent R.I.P. Jackie Chan death pages on Facebook boast a paltry few hundred “likes.” The Morgan Freeman death hoax page of 2012 gained well over a million in under a day.

So good job for not believing in death hoaxes anymore, Internet. You win cookies!