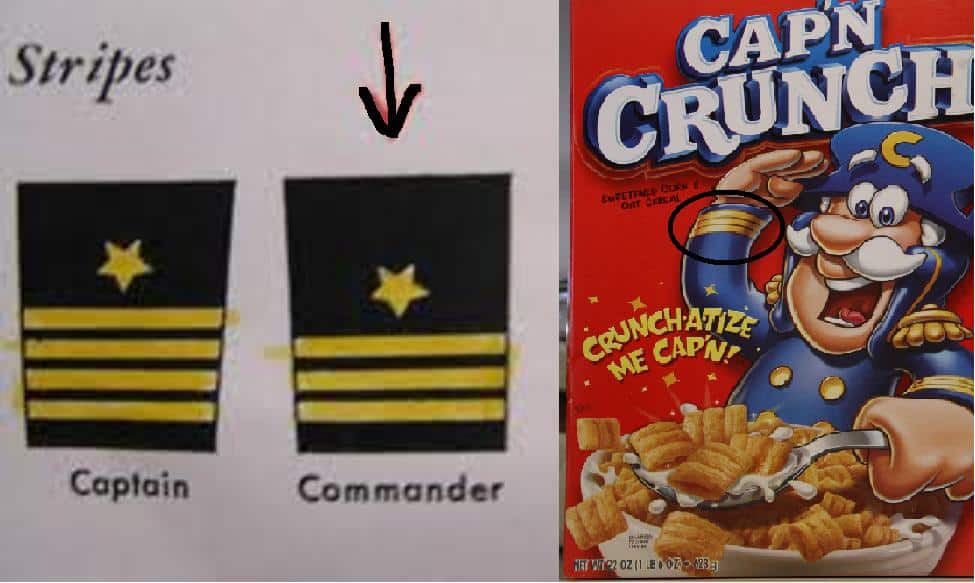 You might have seen a bit of disturbing news about Cap’n Crunch today. An image posted to Reddit and Imgur pointed out that due to the number of stripes on his sleeves, the cereal icon is actually just a lousy Commander, and therefore a childhood ruiner.

The revelation has caused the Internet to exploded with disappointment and despair, even as the “Cap’n” himself tries to do damage control and dispel the rumor on Twitter.

.@consumerist All hearsay misunderstandings! I captain the S.S. Guppy with my crew, which makes me an official Cap’n. #CrunchatizingRumors

Yeah, we’re not 5-years-old anymore, “Cap’n,” and we don’t buy that bullshit explanation! We’re with Foodbeast’s Charisma Madarang who said that her whole life was just “shattered into a pile of stale cereal crumbs” by the revelation that we now have to say “Crunchatize me, Commander” when it’s breakfast time.

We should note that there is an explanation floating around out there suggesting that Cap’n Crunch is still a Captain, so long as we’re playing by French rules where three stripes denotes a “Capitaine de frégate,” but that’s somehow worse.

Additionally, “Capitaine de frégate” translates to “Commander” in English, so, you know, back to square one.

Anyway, on to the massive outpouring of existential grief and black comedy found on Twitter in reaction to the Cap’n Crunch scandal.

So it turns out Cap’n Crunch wasn’t a real Captain, He is really a Commander….And now my childhood is ruined:(… http://t.co/Q2X0vr0MMK

But Count Chocula was a real Count, yes? RT @msnNOW Cap’n Crunch has been lying to us for years, isn’t a real captain http://t.co/YpkcGWtc4A

Cap’n Crunch: Not really a Captain?!! The story Cap’n Crunch doesn’t want you to hear. pic.twitter.com/ijJJ0tRXEw

A woman once sued Cap’n Crunch because their “crunchberries” weren’t real berries.

Would you quit trying to ruin my #childhood! | Cereal dispute: Should Cap’n Crunch be demoted? http://t.co/SzXSIeFq4U via @wkyc

Are you depressed that Cap’n Crunch is really just a lousy Commander?

Israel’s Iron Dome has protected the country against missile attacks for years. The Iron Dome in Israel is the biggest of its kind in the world. No other countries in the world use the same air defense system, meaning it is one of a kind. The tension between Israel and Gaza has been going on… END_OF_DOCUMENT_TOKEN_TO_BE_REPLACED

The world is devastated by the news that Britain’s Prince Philip, the Duke of Edinburgh, has died at the age of 99. Palace media confirms that the Duke has expired mid-day today, April 9th. The announcement did not contain any specifics on the cause of death. The United Kingdom will enter a state of national… END_OF_DOCUMENT_TOKEN_TO_BE_REPLACED

Who would have known that religious prophets would be among the most loyal supporters of former President Trump? In fact, it has been observed that the most conservative Christians may have been the right amount of push for Trump’s presidential win back in 2016. Since Trump’s election back in 2016, numerous self-proclaimed “prophets” have been… END_OF_DOCUMENT_TOKEN_TO_BE_REPLACED