It’s getting harder and harder to keep up with Amanda Bynes’ slam-book on Twitter. Bynes now says Miley Cyrus is “ugly,” but is that really even an insult coming from the former actress?

On Wednesday, Bynes tweeted a picture of Miley Cyrus with the words “UR ugly.” 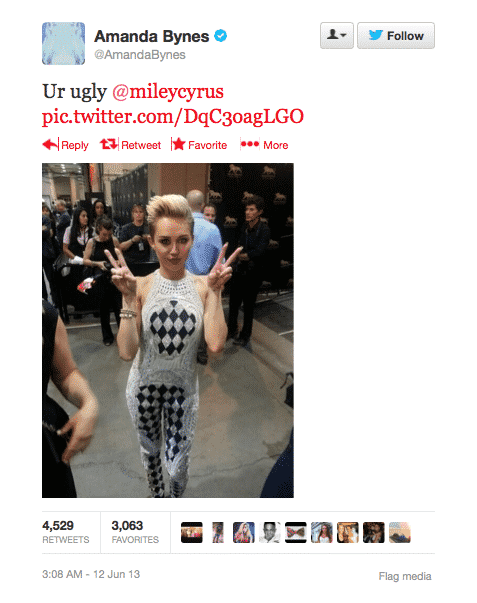 Bear in mind, Bynes is calling everyone ugly these days, from Drake (whom she once dreamed of a dalliance with) to her own father. It could simply be that Bynes wants to scoop up Cyrus’ on-again, off-again boyfriend/fiance and is preparing for an all-out war.

“Liam Helmsworth is the most gorgeous man on the face of the earth other than Tanz Watson. FYi!” Bynes tweeted two weeks ago. That tweet, along with the tweet calling Miley Cyrus “ugly,” have since been deleted.

In any case, Cyrus doesn’t seem to give a flying rats ass what Amanda Bynes thinks of her, responding to the tweet in an interview with the radio station Hot 95.5.

“I won’t even entertain that thought. I think it’s all so sad and I don’t want to add any fuel to that fire. It’s really so sad to me. I was rooting for her comeback until [she] started attacking me.”

But is Amanda Bynes really attacking everybody? Maybe calling people “ugly” is like how Amanda Bynes “pokes” you to start up a conversation. Most people she has traded barbs with (including RuPaul, Jenny McCarthy, more) don’t seem to take her too seriously, and a majority of these Twitter melees end pretty quickly.

What’s more worthy of our attention, in my opinion, are all of these fake Twitter handles Bynes follows and/or retweets. Some have argued that these handles are operated by Bynes herself, and methinks I’ve spotted a new one:

@amandabynes everyone leave Amanda alone! Noone would b happy wit media making shit up about there own lifes! Ignore the haters!

Sure, there’s ONE photo (that could have come from anywhere) but I find it unlikely that “bonnie” created a Twitter account two days ago just to defend Amanda Bynes.

This is my twitter. I say whatever I want. Thanks!