The NBA finals have generated more than 150 million mentions across our favorite social platforms and the team at Networked Insights has analyzed those conversations to figure out how social media mentions are being divided among various different demographics.

Top 10 NBA Players on Social Media (based on stats from the last 12 months):

Here are the demographics for social mentions based on male and female fans for both teams:

With various studies proving that Apple iPhone users are bigger internet users we weren’t surprised to learn that they also dominated NBA Finals mentions via social: 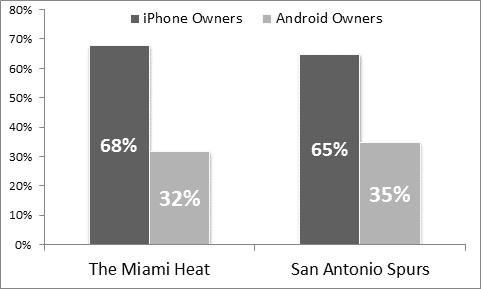 Take note Miami Heat players, women like you more, in the meantime the San Antonio Spurs have more fans on the Google Android platform – I’ll put a check mark for the Spurs next to “smarter” fans. Kidding aside the numbers show that even in male dominated sports the demographics for fans are not as black and white as some fans might think.