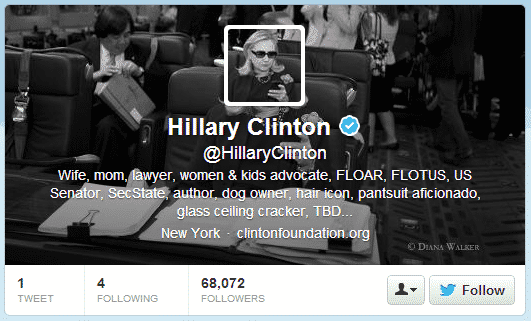 Former First Lady Hillary Clinton didn’t touch her Twitter account for the last year in her role as the Secretary of State. Now the potential future US Presidential nominee is back on the social network and ready to tweet.

@HillaryClinton became a famous account after it was parodied by the Tumblr blog Texts from Hillary.

Here is the first tweet sent out by Hillary Clinton in more than one year:

Shorly after she sent out that tweet Hillary Clinton was quickly welcomed back to the popular social network by her husband:

Does @twitter have a family share plan? Great to be here with @hillaryclinton @chelseaclinton. Looking forward to #tweetsfromhillary.

After being mentioned by her father Chelsea Clinton added:

Welcome Mom!MT: @hillaryclinton Thanks for the inspiration @asmith83 @sllambe – I’ll take it from here… #tweetsfromhillary