by Todd Rigney 9 years ago2 months ago

Is Megan Fox returning to the Transformers franchise? Depending on how you approach a recent Instagram pic released by Paramount, this could very well be the case.

Transformers 4 director Micheal Bay recently tweeted an image of the 2013 Lamborghini Aventador LP 700-4 Coupe that’s being used in the film. Although his tweet didn’t contain any information about Megan Fox’s involvement with the movie, this would all change as soon as Paramount got a hold of it.

Shortly after Bay’s post, the studio’s official Instagram account posted the same image and information. However, Paramount’s post would contain the hashtag #MeganFox. Not surprisingly, it didn’t take long someone over at Shoot for the Edit to notice Fox’s name.

Once word spread about hashtag, Paramount took down the image in question. However, someone managed to get a screenshot of the image before its removal. You can find the mistake (or tease) embedded below.

Fox and Bay feuded shortly after Transformers: Revenge of the Fallen was finished. The actress was reportedly forced to apologize after the spat had a negative effect on her career. The two would later squash their differences, resulting in Fox’s casting in the Michael Bay-produced Teenage Mutant Ninja Turtles flick.

Nothing about Megan Fox’s involvement with Transformers 4 has been confirmed by either the actress or the director. However, anything can happen between now and next summer. The next installment of the franchise is expected to arrive in theaters on June 27. 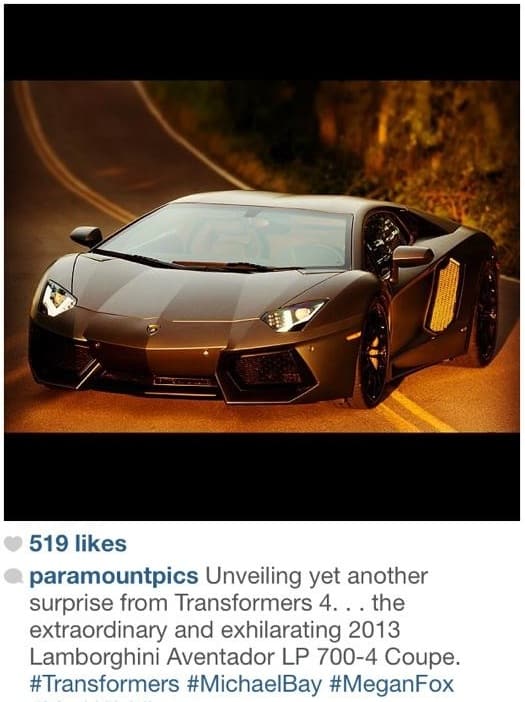 What do you think about Megan Fox’s rumored involvement with Transformers 4? Do you think the Instagram post was an honest mistake or a not-so-subtle tease?