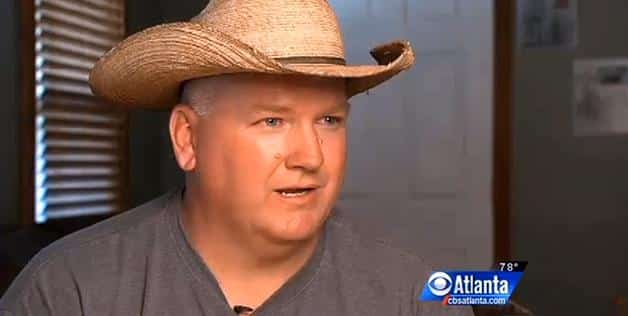 Haralson County, GA – A school bus driver fired for a Facebook post he refused to take back has become a social hero by our standards.

Johnny Cook lost his job after he posted a rant to Facebook about a middle-school student who was short 40 cents on his pre-paid lunch card, and subsequently went hungry that day.

“This child is already on reduced lunch and we can’t let him eat. Are you kidding me?” Cook posted, also putting up his phone number and offering to cover the costs for the next kid who is a bit short on his lunch card. Roughly 200 people liked the post, at first, but it caught the attention of the superintendent after going viral with 155,000 shares.

The next day he was given an option: Recant and apologize, or be fired. Cook chose the latter.

School officials cited surveillance footage which hey say proves the student never even went through the lunch line. Still, Cook said that he believed the student who approached him.

“I felt like in my heart of hearts the kid was telling the truth. Whether he was or whether he wasn’t, I believed him. So I was not going to recant the story,” Cook said.

CBS Atlanta spoke to the child’s family, and they confirmed Cook’s version of the story.

There is currently an online petition going to get Cook his job back, which you can see here. In his abundant free time, Cook has elected to start a Facebook initiative called Johnny’s Kids, dedicated to the issue. You can check that out here.

What do you think? Does Johnny Cook, the school bus driver fired for a Facebook post, deserve to get his job back? Sound off! If you ask me, there are much worse things you could lose your job over.

Presidential pardons are one and many in the history of the US. There are many times when US Presidents granted reprieves for their citizen’s misdeeds. The US President may grant a pardon for any individual, including himself, for any crimes done against the country and its citizens. This issue of Presidential pardons has been trending… END_OF_DOCUMENT_TOKEN_TO_BE_REPLACED

President Biden has tapped Rachel Levine to be his assistant secretary of health, making her the first publicly transgender federal official. In 2017, Democratic Gov. Tom Wolf appointed Levine to her current post, making her one of the few transgender persons serving in appointed or elected positions countrywide. Biden said in a statement: “Dr. Rachel… END_OF_DOCUMENT_TOKEN_TO_BE_REPLACED

The minimum wage hike has always been an issue in the US for the past decades. With only a few hours before Biden gets inaugurated as the President of the United States, people are excited for all his promises to take place. One of these is his plans to raise the minimum wage of workers… END_OF_DOCUMENT_TOKEN_TO_BE_REPLACED