The Taco Bell employee whose shell licking prank was posted to the company’s Facebook feed has been fired, it was reported, a day after his ostensibly unhygienic behavior made its way to the brand’s page.

The Taco Bell employee’s reported termination is an increasingly common example of the inadvertent social media firing — the sort where someone does something stupid and someone else posts it to a social media site, leading to their termination.

It appears that not one Taco Bell employee but two were implicated in the social media scandal, and the brand followed up with the public via an “UPDATED STATEMENT REGARDING SOCIAL MEDIA ISSUE” (all caps) notice posted to the brand’s official site.

The statement was not shared on social media sites, but in it, Taco Bell begins:

“On June 2nd, we learned of a photo circulating online illustrating a Taco Bell restaurant team member violating our food handling procedures with a stack of taco shells … Our food handling procedures are strict and we have zero tolerance for any violations. In the spirit of full transparency, we want to inform you of what we know in order to respond to customers’ questions on our social media channels.”

In a section titled “How Did this Happen,” Taco Bell explains:

“The taco shells were used for training in March before we launched a new product, and were in process of being thrown out. Two employees, however, used them to take a photo for an internal contest in which company and franchise employees could submit for approval photos of themselves enjoying their first bite of the product.”

“The contest had clear guidelines about what was acceptable and unacceptable. This image was clearly unacceptable – it violated the rules and spirit of the contest, and the employees never submitted it. But an employee posted it on a personal social media page in violation of the franchisee’s policies, and it emerged online in social media.”

“Our first question was, were the taco shells served to customers? In short, absolutely not. The taco shells were sent to restaurants for training purposes before the new product launch, so team members could use them to practice making the new product before it became available to the public.” 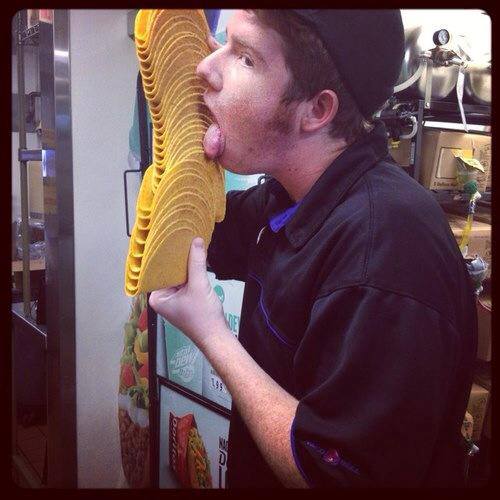 “We do not believe these employees harmed, or intended to harm, anyone. But we deplore the impressions this has caused to our customers, fans, franchisees, and team members. The behavior is unacceptable for people working in a restaurant.Our franchisee is responsible for the employment and conduct of his restaurant’s employees and he has informed us that he immediately suspended the employee shown in the photo and is in the process of terminating his employment. The employee who took the photo no longer works there.”

While we’re normally pretty liberally opposed to social media firings, the Taco Bell employee’s participation in such a damaging (even if inadvertent) act is probably one of the few we’ve seen that seems to warrant it.

What do you think of the Taco Bell employee’s firing?