Holy sh**, did you see Game of Thrones last night? Though we don’t have viewer numbers just yet, we know that the penultimate episode of Season 3, titled “The Rains of Castamere,” was the most-tweeted about episode in the history of the beloved HBO show. If you saw it, it’s easy to understand why.

So it’s pretty much safe to say that as of last night’s episode, the Lannisters have officially beaten the Starks in the War of the Five Kings. You know how you do that? You kill everyone. You kill King-in-the-North Robb Stark, you kill his pregnant wife and unborn child who might have been named Eddard, and you kill his grieving mother who has just seen way too many family members die these past couple of years.

Adding insult to injury, you make one of Robb’s most trusted lieutenants into a turncoat, and you play a song written to commemorate your slaughter of another famed Westeros family while you do it.

It was awful, but those who have a lead on George R. R. Martin’s novels knew it was coming. The audience reaction to last night’s episode, among viewers and non-viewers, looked a bit like this:

Seriously, my wife had to leave the room. It was very bad.

But you guys took to Twitter in record numbers to sound off on all the blood and carnage that was the Red Wedding. A ton of you hate Martin for what he has done, and one Mediaite reporter has even vengefully vowed to cancel his HBO subscription in light of “The Rains of Castamere.”

Most notably, the Twitter feed @RedWeddingTears has begun curating the best reactions, a few of which you can read below:

GOD FUCKING DAMMIT THEY EVEN KILLED THE DOG, WHY GAME OF THRONES WHYYY

All caught up on Game of Thrones and I’m traumatised to the point of considering a boycott of all further episodes. Someone hug me please? — Hannah Goddard (@hannah_echo) June 3, 2013

WHY DOES GAME OF THRONES KILL EVERYBODY I LOVE I WANT TO FUCKING SCREAM — Lauren Gonzalez (@LaurenDFatima) June 3, 2013

What. The. Fuck. Game. Of. Thrones. I am crying because I am so angry and I cannot scream loud enough. DIFNRJDKWNDIDNEJDJDICNEMHIYSLAPQOTMFO

WHAT THE FACK Just Happened At The End O This Episodes! Everyone Is DEAD.. Da Fuck #GameOfThrones

Today was supposed to be a good day! And now my whole mood is ruined thanks to one FUCKTARD of an Episode! #GameOfThrones #GoT

So what do you think? Did George R. R. Martin go too far? Will you continue to watch Game of Thrones through your tears? 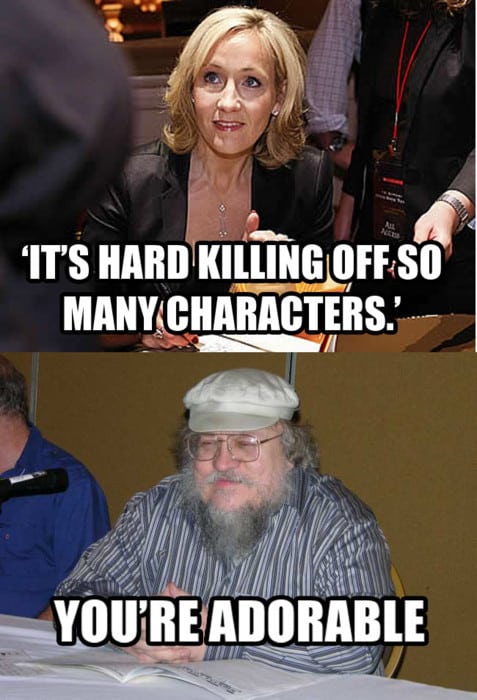 Oh hey, we have an awesome reaction reel to last night’s Game of Thrones episode, too. Roll that beautiful bean footage!