Amanda Byes learned one of the simplest rules of Twitter this weekend: Never start a Twitter war with a drag queen.

My dad is as ugly as RuPaul! So thankful I look nothing like you both! I had nose surgery after my mug shots so my nose and I are gorgeous!

RuPaul probably would have let that slide. After all, Bynes is quite fond of the “ugly” insult and RuPaul probably has better things to worry about than the ramblings of a former Nickelodon star. But Bynes’ tweet came shortly after she used the word “faggot” in one of her Tweets.

That Tweet has been deleted but DListed managed to capture a screen shot. 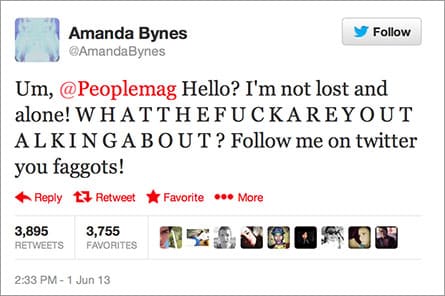 That didn’t sit well with RuPaul. The drag queen took to Twitter to give Bynes a lesson on civility.

Lipsync 4 Ya Life: “She’s more to be pitied than scolded” by Ricky Skaggs youtu.be/ZSRRM7Niuro

Do you think Amanda Bynes learned her lesson?