Facebook Home Offers Advice, Tells Users To Turn It Off...

You wanna know the sign of a bad application suite? Check out Facebook Home. The social network this week started suggesting that users turn off the feature so they can have some “alone time.”

Facebook is actively advertising that HTC First users can deactivate Facebook Home at any time, allowing them to avoid the constant updates that are pushed to their devices from friends and brands that they follow.

While Facebook has promised to fix Facebook Home so it offers better smartphone functionality (seriously they didn’t think about that first), the company for now is basically saying “if you hate our platform turn it off.”

“Cover feed on the HTC First keeps your friends close by. But if you need some alone time, simply turn off Home and use your phone as usual. https://bit.ly/htcfirsthome“.

Facebook COO Sheryl Sandberg talked about Facebook Home this past week during the D11 conference. During her speech Sandberg revealed:

“Facebook Home is v1 of what we think is a very large transformation that we think will absolutely happen, which is rebuilding your phone around people.

The way [phones are] organized is still around activities and apps. We think that phones will be reorganized around people, and we think Facebook Home is the first version of that. We consider it v1, very early. We’d love if we could put out a v1 version and get everything right. The feedback we’re getting is very bi-modal. If you look at our stars, we get fives and we get ones. We get almost no threes.

The people who love it, they’re heavy Facebook users. They want that experience. Not only do they love it but the metrics are working very well for us. They’re using Facebook 25% more and they’re doing 10% more more messaging. So this is a win, both in terms of how this will drive our business and for them.

For the people who don’t love it, they don’t like how it takes over their phone. They don’t like how the launcher re-organizes the apps they’ve already launched, but for the most part they actually like the two core features we launched which are Cover Feed and Chat Heads. So what we are doing is getting that feedback. I don’t know how long it will take. I think it will be a long road. but we really believe we’re on a path to making phones more social.”

Basically Facebook Home will get better, as most horrible Facebook products tend to do when a new version is released. Here’s to hoping Facebook Home can do for version 2 what moving from HTML5 to a native code base did for Facebook’s Android and iOS apps.

Here’s a screenshot of the Facebook Home deactivation advertisement: 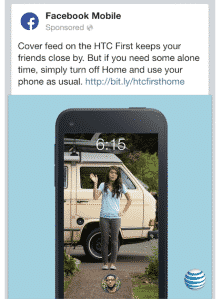 Are you willing to give Facebook Home another shot?