A photograph of a JC Penney billboard in Southern California is going viral on Reddit today due to its accidental resemblance to a dead Nazi megalomaniac.

The billboard shows a simple tea kettle, apparently designed by Michael Graves and including great features like a cool-touch handle. But if you squint, said tea kettle actually looks quite a bit like a stylized silhouette of Adolf Hitler.

Just in case you can’t see it, it’s the handle that forms Hitler’s parted ‘do, while the knob forms his mini-mustache. From there, you know, he’s wearing a tie and “heil-ing” with his right spout.

Tip him over and pour him out.

Thus far, JC Penney hasn’t commented on the apparent resemblance of their tea kettle to Hitler, presumably because they are still in the middle of an Arrested Development binge on Netflix.

Finally! #ArrestedDevelopment is back, and in honor of Tobias, we’re wearing cutoffs to celebrate. twitter.com/jcpenney/statu…

Humorously, the comments on the photograph illustrate Reddit’s creativity in building portmanteaus out of basic German words and tea brands. 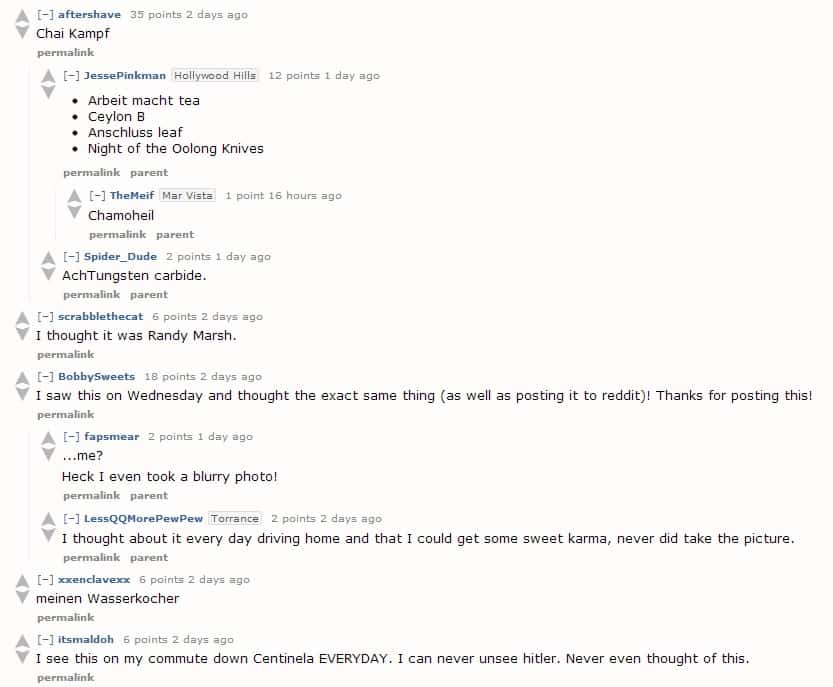 What do you think of JC Penney’s “Hitler kettle” ad? Does it really look like der Führer?