by Dan Evon 11 years ago6 months ago

In February, Twitter helped fuel the Egyptian revolution. But what’s the social media platform of choice when your intentions are less than pristine? You’d need a network that could reach the masses but one that wasn’t exposed to the public eye of the law. The riots in London, which have been going on for the last three days, have been organized by Blackberrys.

Portfolio reports that teens in London have been using Blackberry Messenger to organize riots around the city. The youths have chosen BBM instead of public platforms like Twitter and Facebook because Blackberry messenger only exchanges messages between users who have swapped pin numbers. This way users can communicate with a large amount of people quickly, without leaving a public trace for police. 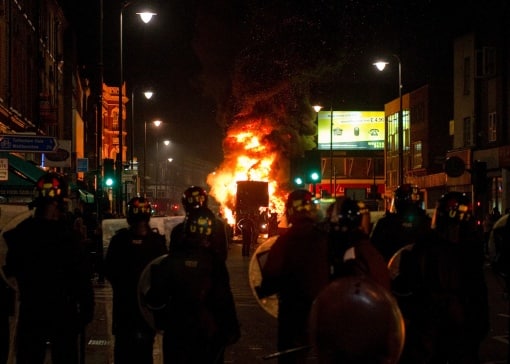 But rioters may only have the private platform for a few more riots. London police are currently working with Research in Motion to investigate BBMs involvement in the riots.

“We feel for those impacted by the riots in London. We have engaged with the authorities to assist in any way we can.”

So will Blackberry hand over private messages to police? They should probably think twice about that. If the London riots were started because of police abuse, I don’t think that the rioters will be pleased that their rights are being violated by the Met, and a large corporation. Just a hunch.

Twitter was also used to direct people to riots and London police officers are after Twitter users as well. Scotland Yard Deputy Assistant Commissioner Stephen Kavanagh said that police were looking into incendiary Twitter messages, and could possibly arrest users.

“That investigation is already under way and that is exactly the sort of thing we are looking at.”