‘Geography Of Hate’ Map Uses Twitter To Show Where The...

Floating Sheep geo-tagged tweets sent out across the country in order to create the “geography of hate” map, which shows the most hateful areas in the country on a heat-map. The red areas show the areas of “most hate,” and son of a gun, the Deep South and the Midwest are the biggest hot spots. If that don’t put the pepper in the gumbo, I don’t know what to say.

For their geographical study, students from Humboldt State checked tweets for a negative, positive, or neutral connotation. The identified more than 150,000 hateful tweets, and then added up each negative tweet by county. They then compared that to the county’s total tweets, enabling them to identify areas with “disproportionately high amounts” of Twitter hate.

The two topics they looked for were racism and homophobia, so the study is a bit limited in that “hate” is limited to those two areas (when there are so many others like politics and religion to take advantage of!), but it’s still an interesting study, even if it does only tell us what we already know. How population figures into the research also isn’t clearly defined.

The authors also say that people living “in the blue” shouldn’t be too proud of themselves, pointing out that hateful tweets in some areas are widely distributed. They write, “when viewing the map at a broad scale, it’s best not to be covered with the blue smog of hate, as even the lower end of the scale includes the presence of hateful tweeting activity.”

“Ultimately, some of the slurs included in our analysis might not have particularly revealing spatial distributions. But, unfortunately, they show the significant persistence of hatred in the United States and the ways that the open platforms of social media have been adopted and appropriated to allow for these ideas to be propagated.”

Check out the “geography of hate” maps below courtesy of Floating Sheep, and let us know what you think of the study: 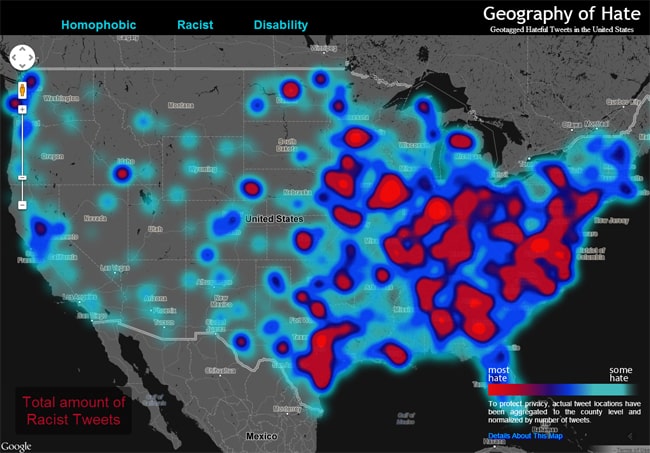 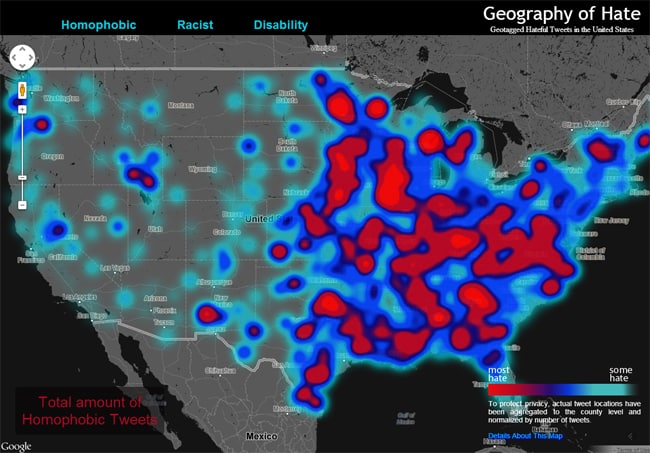