Twitter users don’t normally drink beer, but when they do … they prefer Dos Equis.

The popular Mexican lager was Twitter’s go-to beer on Cinco de Mayo, according to analysis performed by social media management firm Expion. They looked at all beer brand mentions for ten labels between April 24 and May 6 to see which generated the most discussion on Twitter. 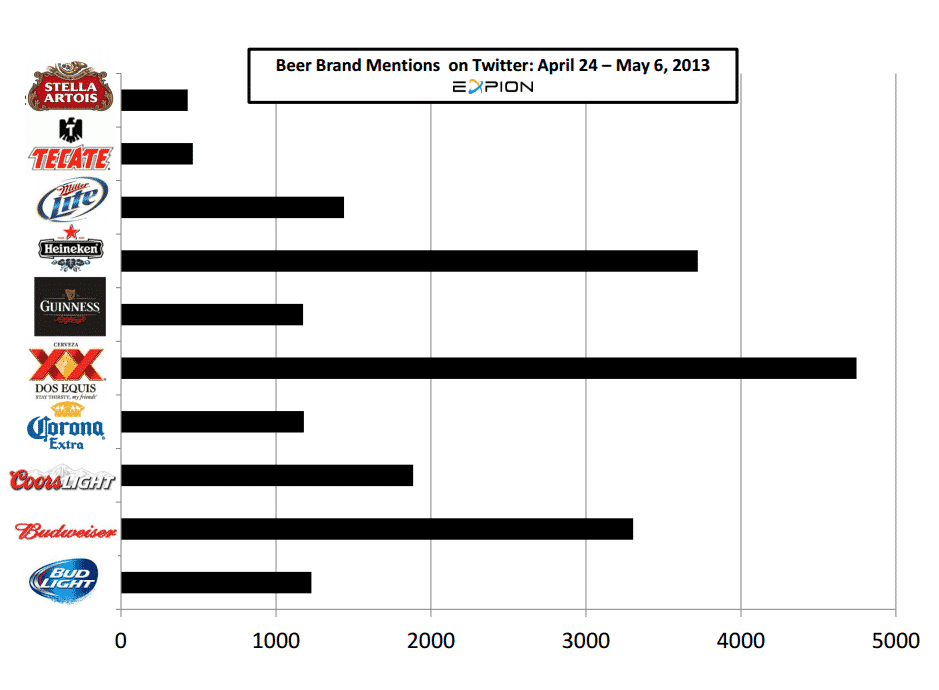 You can see from the graph above that Dos Equis was by far the most interesting beer in the social world on Cinco de Mayo, earning 4,746 mentions – way more than any other beer on Twitter at the time, including other popular labels like Corona and Tecate.

Expion only tracked @ mentions of each brand, which is why the numbers probably seem low. Studying hashtags and out-and-out mentions seems like something you’d want to do, but according to Expion’s CMO Mike Heffring, “We feel that @ mentions are the best representation of users engaging or responding with the brand messages.”

Anyway, Dos Equis’ own social engagement strategy (getting Cinco de Mayo going early with the hashtag #DosDeMayo) actually fell pretty flat, despite the online popularity of the label. It generated just shy of 2,000 mentions, with some analysts predicting that the hashtag would have been more successful had May 2 fallen on a weekend.

The hashtag #CincoDeMayo racked up 227,668 mentions overall, with this tweet being most popular:

The line to his #CincoDeMayo party started forming on Ocho de Febrero.

But this one is probably our favorite:

What do you think of Dos Equis being Twitter’s favorite beer on Cinco de Mayo?