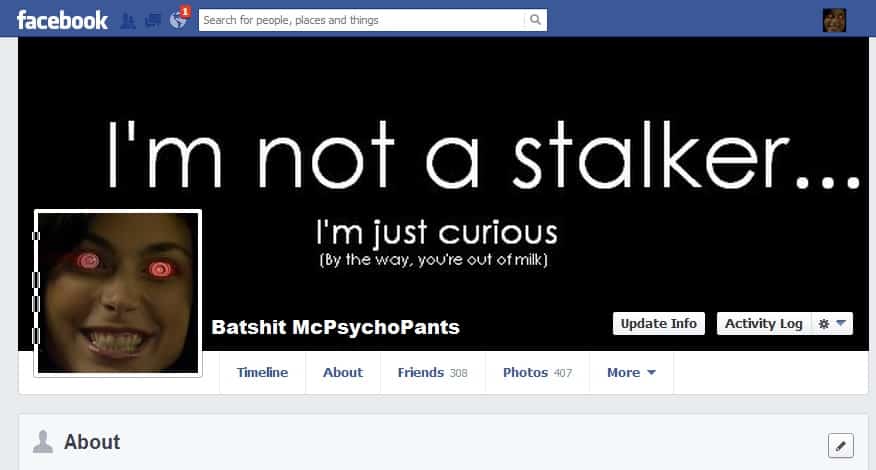 Facebook can turn you into a psycho, as if you needed us to tell you that.

It might sound like an old-hat revelation to you much as it did me, but “Facebook psychosis” is moving out of “Internet wives tale” speculation and into cold, scientific reality thanks to a study from Dr. Uri Nitzan of Tel Aviv University’s Sackler Faculty of Medicine and the Shalvata Mental Health Care Center.

Oh, and the real “told you so” kicker? Facebook psychosis tends to hit right after a bad breakup.

For the study, Nitzan looked at patients who were experiencing “loneliness or vulnerability due to the loss of or separation from a loved one” and discovered that “a connection was found between the gradual development and exacerbation of psychotic symptoms, including delusions, anxiety, confusion and intensified use of computer communications.”

So when you engage in post-breakup social media stalkery, that really is psychotic behavior.

Maybe you have checked your ex’s profile religiously, losing your mind over new pictures with members of the opposite sex or ambiguous status updates that seem to indicate they have moved on and are *gasp* happy without you. Maybe they’ve blocked you, and you keep looking for ways to access their page, like setting up a fake page or going through mutual friends. Maybe you check what little you can see just to know whether they’ve added a new friend or changed their profile picture.

What’s worse, psychosis that begins on social media can spread into your real-life relationships and interactions. Even worse, the argument that social networking only unleashes the inner psycho in all of us doesn’t seem scientific. Instead, you can start off perfectlyhealthy and end up a babbling maniac for no reason whatsoever.

“Some of the problematic features of the Internet relate to issues of geographical and spatial distortion, the absence of nonverbal cues, and the tendency to idealize the person with whom someone is communicating, becoming intimate without ever meeting face-to-face,” Nitzan says.

He also opines that Facebook creates a “break with reality,” which is interesting since social media has become a primary form of human communication, so breaking from reality is the new reality.

That’s deep shit, causing Chris Matyszczyk of C|Net to bemoan, “I have a feeling that what is now described as psychotic and delusional will soon be seen as the normal state of human affairs.”

Have you ever experienced Facebook psychosis? Are you experiencing it right now?