by Dan Evon 11 years ago8 years ago

Twitter on Thursday announced that Promoted Tweets will not begin appearing “at or near the top” of user timelines, rather than only appearing in search results as they previously have.

Users shouldn’t fear an overflow of promote tweets as they will only see the promotions when they are already following the company sponsoring the Tweet. For example if you follow Coca Cola and they are sponsoring a tweet it will appear towards the top of your timeline.

Since users are already following the brand in question the Tweets will not interrupt the users regular Twitter use, Twitter spokesperson Carolyn Penner told VentureBeat:

“Because users are already following these brands and because Promoted Tweets are just normal tweets, these messages are already a part of the users’ Twitter experience.”

Users will also be able to block promoted tweets on a one-by-one basis, which means you don’t have to see that Coca Cola tweet at the top of your timeline all day long. The ability to remove a tweet while not ideal for company’s still means customers are at least engaging on some level with the promoted tweet.

The first company’s to use the new promoted tweets display include:

Here’s a closer look at home the promoted Tweets will display in a users timeline: 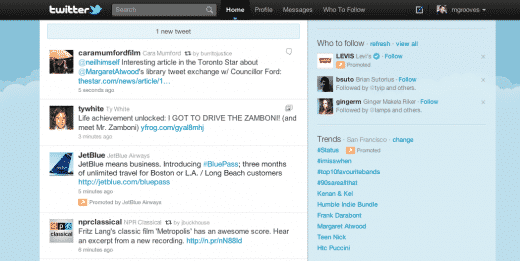