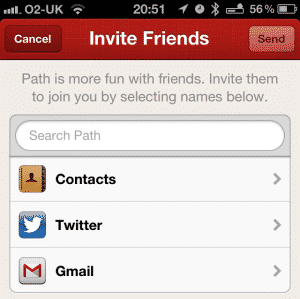 Facebook’s social graph was yanked from Path smartphone apps over the weekend after the company restricted access to Path’s API privileges. With access gone Path users can no longer use Facebook to search for friends and invite them for inclusion via the Path app.

While Path users can still login using the Facebook button they can no longer find Facebook friends and invite them to the network.

Facebook has removed access to its API in the past, most notably for MessageMe and Voxer, both of which were deemed as competitors to Facebook’s own third-party software solutions.

While Facebook did not directly state that Path access to its API was removed because of Spam we do know that Facebook users began receiving unwanted messages from Path last week.

In Path version 3.0.4 users can still invite friends from their contact book and Gmail contacts lists.

Last week Path reached the 10 million registered users milestone, largely in part to Facebook invites and word of mouth for the mobile only social network.

Path has now added Twitter as a new way for users to find and invite their closest friends and followers to their Path accounts. Path could find success by giving Twitter users their first opportunity to create a private network of their own.

Path is believed to have a high user churn which means the Facebook restriction could hinder the mobile social networks growth more than even Path may believe.

Will Smith disclosed in a podcast interview recently that he would “consider” running for president “at some point.” In an interview released Monday, the 52-year-old rapper told Crooked Media’s “Pod Save America”: “I think for now I’ll let that office get cleaned up a little bit. And then I’ll consider that at some point down… END_OF_DOCUMENT_TOKEN_TO_BE_REPLACED

Vaccination programs are currently on roll-out and countries that vaccinated for COVID-19 are talking. Questions are everywhere, and it is building up people’s anxieties about vaccination. How has the vaccine affected their population? Are the vaccines any good? Should we research more on newer vaccines? Can the vaccines kill the mutated virus? The answers change… END_OF_DOCUMENT_TOKEN_TO_BE_REPLACED

Texas Senator, Ted Cruz, received heavy criticism after taking a vacation to Cancun with his family in the middle of a crisis. The latest power crisis in Texas left hundreds of homes without electricity and water for more than 48 hours in negative degree weather. This has left the lives of many Texas residents in… END_OF_DOCUMENT_TOKEN_TO_BE_REPLACED