Digg Reader To Debut In June, Will Require A Subscription...

We were semi-excited when we found out that the team at Betaworks owned Digg was taking the reigns and creating a Google Reader alternative called Digg Reader. On Tuesday that excitement slowly began to pass. The company announced that the product will indeed be released in June but that it will come with a subscription based fee.

In a blog post to the people of the internets Digg writes:

“Free products on the Internet don’t have a great track record. They tend to disappear, leaving users in a lurch. We need to build a product that people can rely on and trust will always be there for them,” the company said in a blog post.

Digg says a recent study found that 40 percent of respondents said they would be willing to pay for a product if it involved a payment structure and the promise of a continued feature.

Here’s the company’s rather amusing chart of responses (amusing because it has exactly two answers – yes and no): 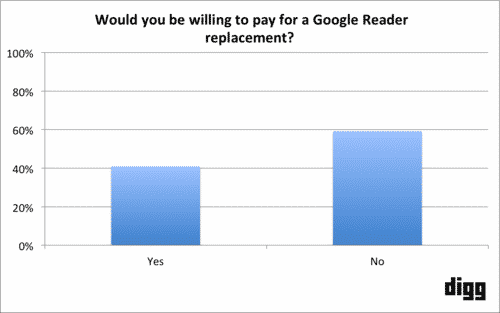 Digg says it will offer a paid structure in order to allow for user privacy by avoiding advertisements from within the platform.

The company doesn’t seem to have the pricing structure for the platform figured out:

“We’re not sure how pricing might work, but we do know that we’d like our users to be our customers, not our product.”

While the Digg Reader survey found that most Google Reader users did not use social media integration regularly the company says paid users will have access to top social networks. Here are the responses from the survey: 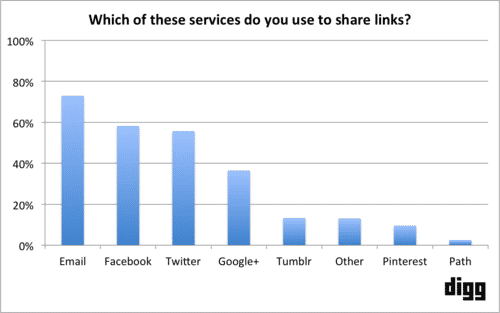 “Though we may not have a robust social functionality in place for launch, ultimately we believe that social features which foster connections between readers will be an important part of the Digg experience.”

In the meantime I’ll be sticking with Feedly, because I like free stuff that looks pretty.

It’s not that the Digg Reader doesn’t have the potential to be a great piece of software, it’s just that there are so many competing readers making their debut and they all offer the type of functionality that as an RSS reader I have come to enjoy over the years.

Notice that Digg didn’t ask if faced with a free alternative those same customers would pay for the service. The true test will be whether or not users will place the Google Reader next to other free choices and still choose to pay for a service that for all intensive purposes just pushes published information to users.