‘Joffrey Bieber’ Tumblr Is Pure Entertainment Gold, I Tell You

Canadian pop sensation Justin Bieber and Game of Thrones‘ brat king Joffrey Baratheon don’t really seem to have that much in common, but seeing both merged into one on Tumblr honestly makes us wonder how no one has ever thought of this before.

Bieber and Baratheon merge to become “Joffrey Bieber” on a new Tumblr account named for the soon-to-be viral phenomenon. “Where fiction’s biggest brat and real life’s biggest brat become one!” reads the description, and sure, we can see it.

Joffrey’s dickishness is well-documented in the George R.R. Martin series of novels and the HBO adaptation based on them, and Bieber’s dickishness has been increasingly documented by the media in recent months.

But what happens when the two are merged together is nothing short of pure magic. Like I said up top, it doesn’t really make a whole lot of sense until you see it. Even then, you still can’t really explain it. You just get it. 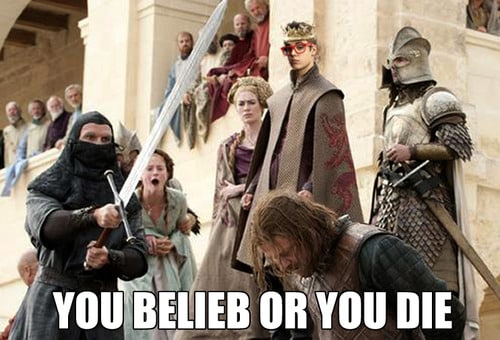 You can check out the entire Joffrey Bieber Tumblr (we strongly encourage you to do so) here. You can submit your own, as well.