If you follow the Associated Press on Twitter, your heart probably stopped this afternoon when you read a tweet announcing two explosions at the White House, resulting in the president being injured.

The AP’s Twitter account announced the shocking news around noon, though no other major publication was reporting the story.

But it’s the AP, a serious publication that tends to break big events like that, so many in the Twittersphere were understandably shaken by the tweet. 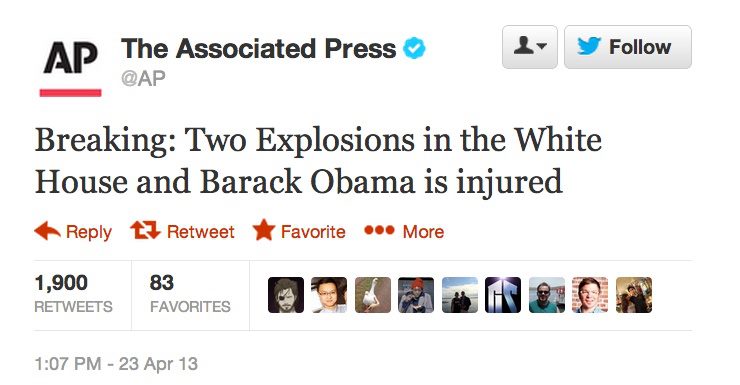 Fortunately, there was no attack on the White House today, and President Obama is (knock on wood) in robust health as of this writing.

The AP‘s Sam Hananel confirmed that the publication’s main Twitter feed had been compromised shortly after the original tweet was sent out.

Tweeps have done a bang-up job shooting down the disinformation thus far, as well. Hananel’s tweet has picked up nearly 5,000 basic retweets as of this writing. Additionally, other top journalists have shot down the rumor, some with humorous aplomb.

The AP also issued a statement regarding the apparent hack, writing “The tweet about an attack at the White House is false. We will advise more as soon as possible.”

Did you see the AP‘s tweet? We’ll let you know more about the hack as it becomes available, but until then, the White House has not been attacked, and President Obama is just fine.

UPDATE: That fake AP tweet actually caused the Dow to tank for a second: 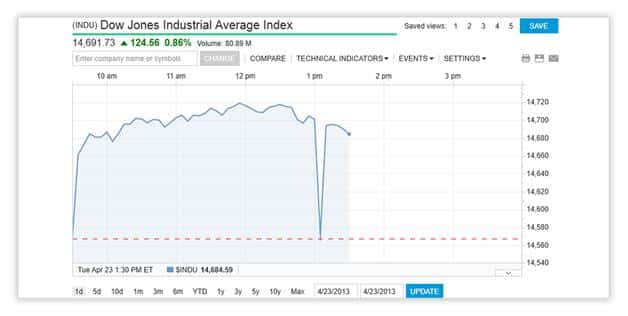