by James Kosur 11 years ago8 years ago

Google+ less than one month after launching has announced an iPhone app that brings the sites most popular features to the masses including Circles, Huddles, Streams and Photo sharing. In this review I take a quick look at the apps most popular features with screenshots showing off the programs capabilities. 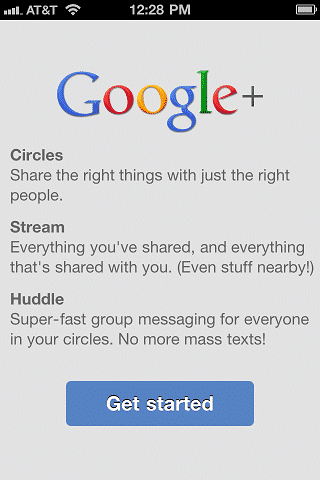 After clicking on the “Get Started” button I was taken to a Login screen: 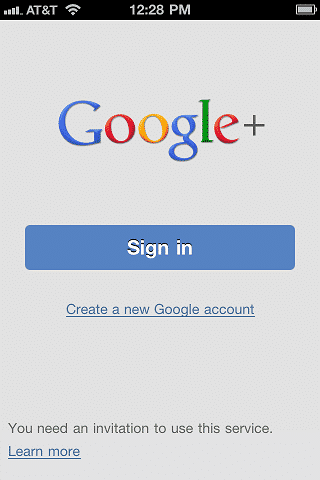 Which then sent me to the official login display where I was asked to type in my Google account username and password: 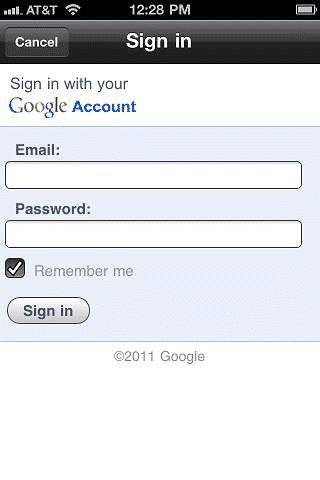 After logging into the system users are then asked if they want to receive push notifications (I would suggested clicking yes on this feature to get the most out of the application) after which point I was greeted with a main homescreen display which allows for quick navigation between the programs options which includes: Stream, Huddle, Photos, Profile and Circles. 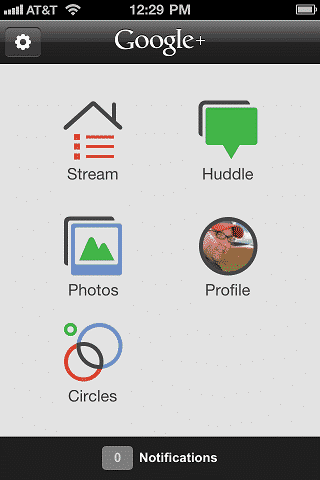 As you’ll notice on the screencast above, your main profile pic shows up under “Profile” and the bottom bar shows off “Notifications” which allows users to quickly find updates since their last check and includes new friends who have added you to their circles, posts, comments on posts, etc.

The first stream showcases new messages from your circles of friends, family and co-worker as seen below: 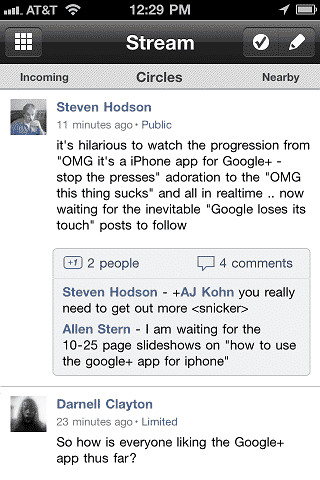 I was then able to swipe left or right to find “Nearby” and “Incoming” streams. Here’s a closer look at “Nearby” streams which showcases users in your area who have update their profiles: 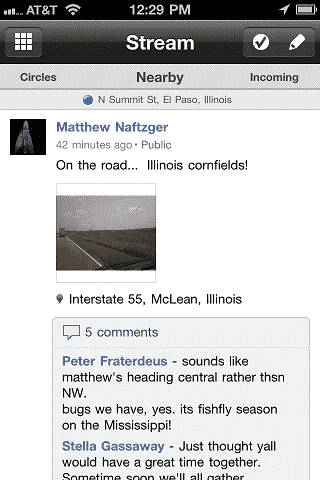 As you can see the top message comes from Illinois where I am located and is therefore shown. I’m not sure what Google+ considers to be nearby in this case, but it’s at least state focused in this particular example.

Finally the incoming feature works in exactly the same way with incoming updates posted as shown below: 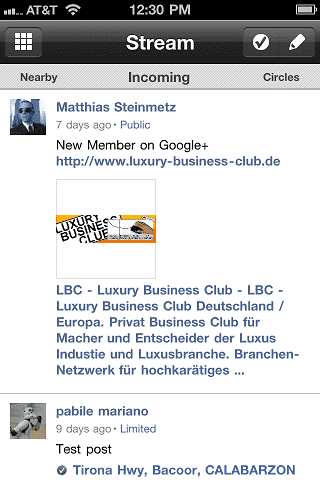 After playing around in the Stream feature I clicked on the multiple windows icon on the top left hand side of the program and was returned to the Google+ iPhone App home screen where I could navigate to the “Huddle” section.

In “Huddle” users are able to enter all Huddle’s they have already created or joined via the Google+ website, while they can also choose to create new Huddles, change the name of huddles, leave huddles and even mute individual huddles as they choose.

In each huddle you can also see who is participating in that huddle, read messages in a scream format and even type a message for the huddle, allowing for truly interactive huddle participation, here’s a first look at one accessed huddle: 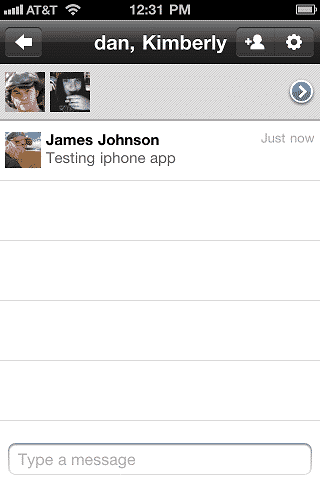 Switching between Huddle’s is also simple, just click on the Huddles icon on the home screen and you will be taken to a list of all huddles you are participating in.

After exiting the huddles display I then accessed the Photos section which breaks up the photos section into different categories which includes “From your Circles,” “Photos of you,” “Your Albums” and “From your phone.” 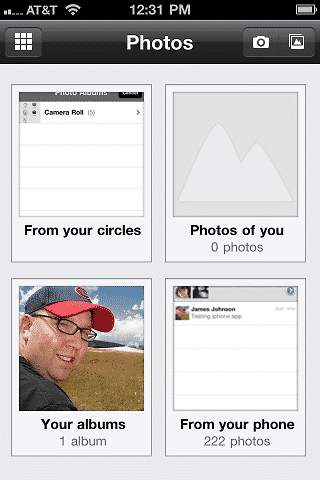 Clicking on each individuals photo album then displays your photos in a graph display which can be scrolled up and down with a quick swipe of your finger. 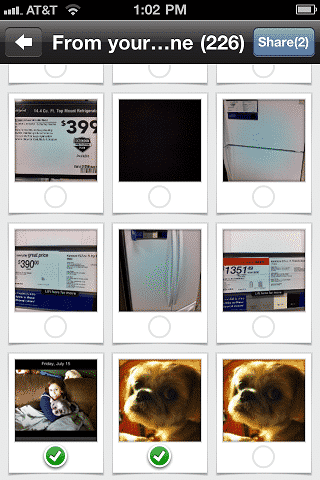 After each photo has been selected and the “Share” button is pressed at the top right side of the display users are then given the option to share located based information about the shared photos and even leave a message about the photos being uploaded. Users can also click on the photo button to take a new picture for sharing purposes or navigate back into their phones photo albums to grab more photos before sharing. 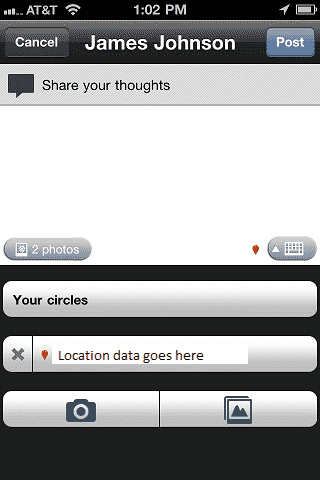 Users can also access the “Circles” option which includes two features, the ability to search your Circle friends in alphabetical order and through a search bar and the option to find “Suggested People” for your network: 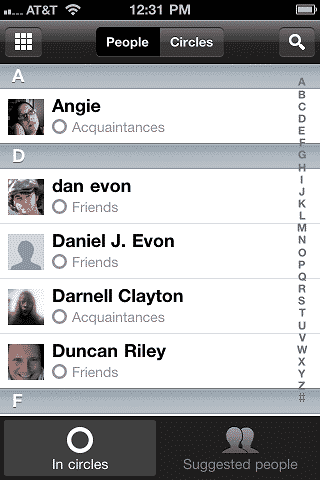 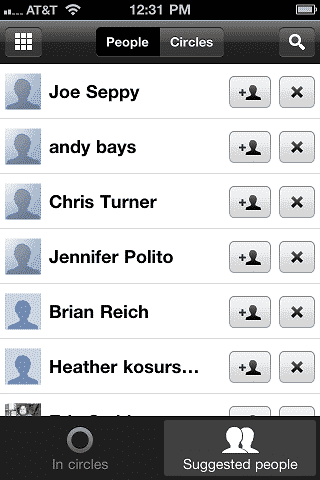 You can also click on the “Circles” tab instead of “People” in order to see your groups of circles instead of individuals users.

Finally the Google+ iPhone App allows users to access their profile where they can see their own status updates, check out their “About” section but not edit it and view profile photos: 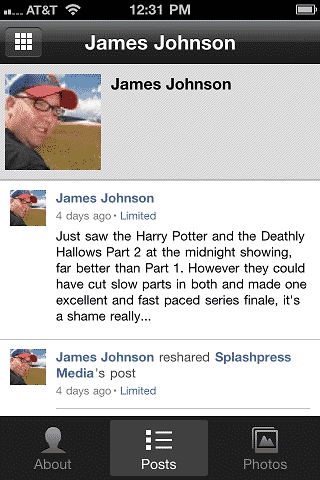 So there you have it, Google+ has released an intuitive, simple to use iPhone app that will likely receive more features in future updates, for now it’s a competent application that delivers on the type of social network functionality I would expect from a new social networking application and it does it with easy to navigate features that makes sharing simple and fun.

Update: iOS 5 Beta 3 users have claimed that the application is crashing on their systems. This review was completed using iOS 4.3.3.