The two suspects in the Boston Marathon bombing are tweeting law enforcement authorities and others from several accounts, despite the fact that one of them is dead, and the other is on the lam and (presumably) not a moron.

The other, 19-year-old Dzhokhar Tsarnaev, is still at large. Despite this, the two brothers have very active profiles on Twitter.

The Daily Dot points out that as many as 10 “degenerates” have set up Twitter accounts in Tamerlan and Dzhokhar’s names. They assume the purpose is to either pick up a swath of followers quickly, or it’s just good old fashioned trolling, but no matter the reason, Chase Hoffberger brands the practice “senseless and stupid.”

We’re inclined to agree, especially since stuff like this … 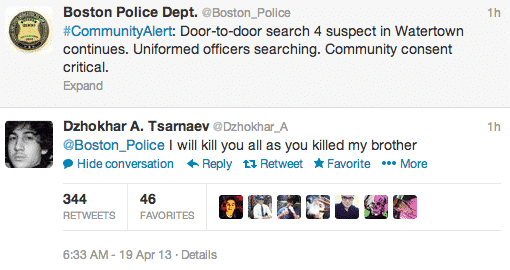 … will absolutely get you arrested.

That handle is the most prominent one right now, having opened at 7:33am ET with that message to the Boston Police. As you can see, it was retweeted a number of times, and the account itself has picked up about 3,800 followers since it went live.

There are a handful of other highly active accounts out there, and some tweeps have fallen for the ruse. 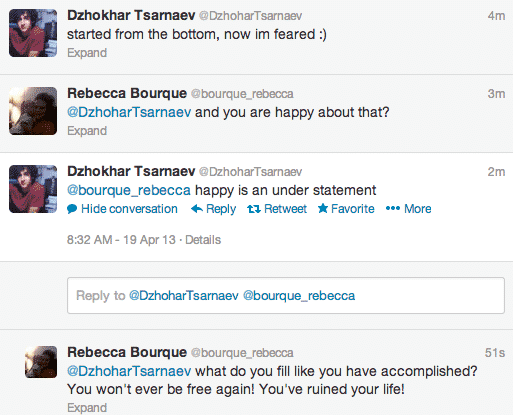 Then, of course, there is Tamerlan, who is actively tweeting from the grave, yet with far fewer followers. 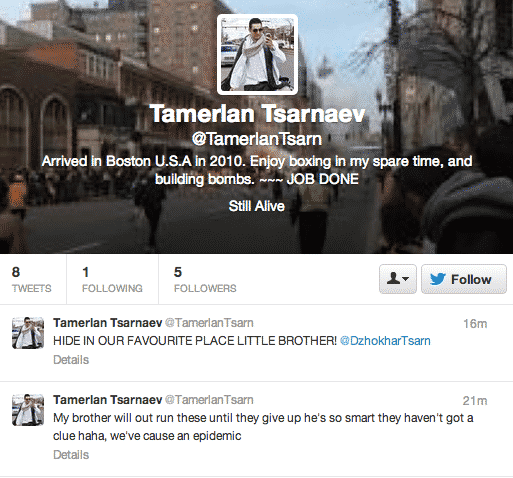 I shouldn’t have to tell you not to bother with the idiots running these accounts. You can flame them if you like, but don’t fall for it. As of this writing, Dzhokhar is camped out and surrounded by police, and the situation is ongoing. Therefore we highly doubt he’s sitting behind cover with an assault rifle in his lap dicking around on a smartphone.