Online gaming, digital books (e-books) and other online services have grown exponentially over the last several years, creating a virtual goods market that is estimated to bring in $318 million by 2015 and company Stampede.it plans to capitalize on that market by offering discounts on virtual goods, much in the same way Groupon offers real world deals to customers.

Stampede.it (currently launched in beta form) is the first company to exclusively offer digital product discount plans to customers through mass buying efforts, the company currently offers one new deal every 2-3 days on a tipping point system which works by discounting products more deeply based on the total number of buyers. For example today’s deal to SkillAddiction.com will cost buyers $15 if 15 people buy the product, $12.50 if 50 people buy the product and just $10 if 100+ buyers take part in the deal. The tipping scale makes sense for a new company since it can help ensure that the product doesn’t expire because of low interest, while it also encourages users to spread the word about new deals and therefore about the company in general.

The site does has an advantage over Groupon, LivingSocial and other social buying discount sites since digital products typically have a low margin which means less risk for sellers. It should be noted that those sites do offer digital products but not as a sole product offering.

The site at this time is still very basic, offering a product, information about that product and their tipping scale promotion with a “time remaining” countdown timer, however they plan to launch new features to grow their community in the future including badges and referral rewards like LivingSocial.com who gives a free product for referring three friends and Groupon who rewards buyers with $10 for referring each one of their friends who purchase a Groupon.

After three days in existence the company has sold three memberships to SkillAddiction.com at a 25% current discount, while those numbers may not be impressive the true success for the company will arrive if they can land large online deals with the likes of Rhapsody, Hulu, Nook e-Books, etc. which in turn can help them more quickly spread news about their digital discounts program. 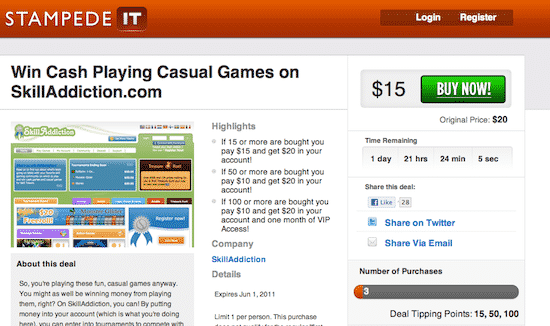 Would you be willing to scout out a digital deals website daily if they were offering major deals from top brands?