Roger Ebert died last Thursday, but don’t un-follow him on Twitter just yet. The legendary Chicago film critic’s account will live on under the control of RogerEbert.com editor Jim Emerson, and Ebert’s own widow, Chaz.

Ebert was a late-comer to Twitter, embracing the micro-blog as a “new voice” after he lost his own to cancer. Late Thursday, Emerson and Chaz wrote to Ebert’s 843,000 followers, explaining that the critic’s voice will live on, in a way, through the @ebertchicago Twitter handle. 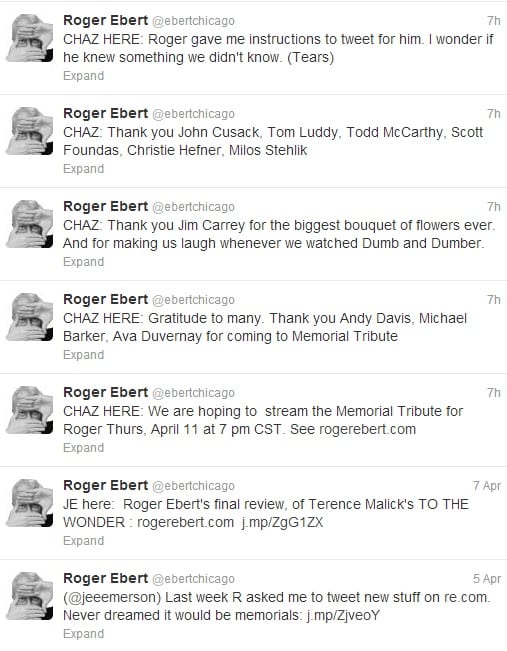 Additionally, RogerEbert.com will continue to be updated regularly. You can check that out here.

What to do with one’s online presence and social media accounts after death has become an interesting topic of discussion over the past several years. Though the Facebook pages belonging to the departed usually turn into haunting memorials by friends and family, there actually are ways to “live on,” so to speak, online after you die.

A service called DeadSocial allows you to schedule posts for Facebook and Twitter, allowing users to “be creative and literally extend the personality you had while alive in death,” according to its founder, James Norris.

Along with DeadSocial, there’s also If I Die, which allows you to send private Facebook messages to friends and family. These could be apologies, “I told you so’s,” even “I always had a crush on you’s.”

Lastly, there’s _LivesOn, which tracks your tweets while alive, learning the kinds of links and content you favor, and even learning your syntax. Once it learns to speak like you, it learns to tweet like you, and is about as close to an A.I. copy of your consciousness you’re likely to get right now. “When your heart stops beating, you’ll keep tweeting,” reads the tagline.

This article kind of went off the rails, so let’s wrap up with a 2010 quote from Ebert himself, about how he felt knowing he would one day die:

“I know it is coming, and I do not fear it, because I believe there is nothing on the other side of death to fear. I hope to be spared as much pain as possible on the approach path. I was perfectly content before I was born, and I think of death as the same state. What I am grateful for is the gift of intelligence, and for life, love, wonder, and laughter. You can’t say it wasn’t interesting. My lifetime’s memories are what I have brought home from the trip. I will require them for eternity no more than that little souvenir of the Eiffel Tower I brought home from Paris.”