Tweets Around the World: Artist Creates Amazing Maps of Tweets...

by Dan Evon 11 years ago8 years ago

The are enough tweets sent everyday to light up the world… That might not exactly make sense, but these maps by Eric Fischer give a spectacular view of the earth in relation to Twitter and Flickr traffic. 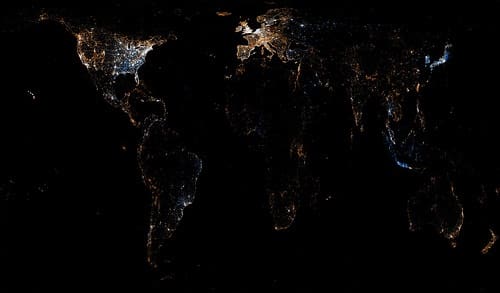 The See Something or Say Something map series by Fischer uses red and blue dots to indicate Twitter and Flickr use.

Fischer uses a program that sorts photos and tweets in chronological order, and plots the earliest ones as the brightest ones. The dots that represent older tweets are dimmer. Fischer says that it takes about 45 minutes to an hour to complete each image.

Fischer has done Flickr and Twitter location maps for New York, Singapore, Europe, Paris, New Orleans… You can see all of his maps on his Flickr page.

Here are some of my favorites.