Teens Still Using Facebook But Begin Questioning The Importance Of...

Facebook is still the social network of choice among teens, although they are beginning to shift their focus away from social networks.

According to research firm Piper Jaffray, 33 percent of the 5,200 teens surveyed chose Facebook as their social network of choice. Following FB was Twitter with 30 percent of the vote and Instagram with 17 percent.

While Teens are still using Facebook en masse, they also note that it is no longer viewed as their most important social network.

In 2012 30 percent of teens called Facebook the world’s most important social network, that number has since fallen to just over 20 percent.

Facebook isn’t alone in the decline, Piper Jaffray has found that teens in general are deeming social media as less important in their lives.

The study found that while YouTube has also experienced a decline, that decline has been at a much slower rate. If numbers hold steady YouTube could soon surpass Facebook on the importance scale.

Here is a graph that showcases how teens view each major social network in terms of importance: 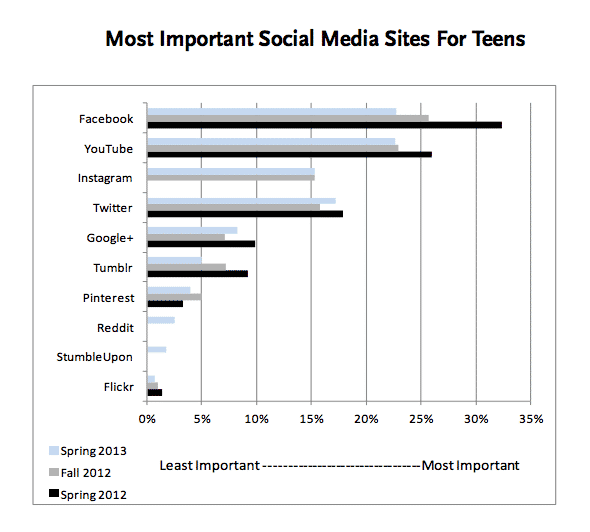 The 5,200 teens who were surveyed made sure to note that the networks they really care about were not on the list. For example, Wanelo, Vine, Snapchat, Kik, 4Chan, and others were left off the list.

In the meantime the platform culture has helped some networks come into favor among teens. As we reported yesterday the mobile-based Vine App is now the number 1 downloaded free app in the Apple App Store.

It will be interesting to see what type of effect Facebook Home has on numbers by the end of Q2 2013.

Do you think Facebook can keep teens interested or is the network always going to be viewed as an aging platform by younger users.