In late February, Dawn Siff made what might be considered the world’s first Vine resume, in all its six-second glory. It showcases Siff’s employable attributes in a quirky way that suggests to a potential employer “Hey, I’ll work hard, but I’m also fun to have around.”

She landed a job at the Economist Group’s commercial unit as a project manager (no word on whether she’ll be flexing those Force skills in the position).

The Vine resume (formerly dubbed the “Twitter Resume”) is a pretty neat idea, but is it really the first?

“The marketer in me wants to say this is the first ever, but the journalist in me can’t,” Siff admitted in February, though she has since changed her Twitter heading to reflect her innovative spirit: 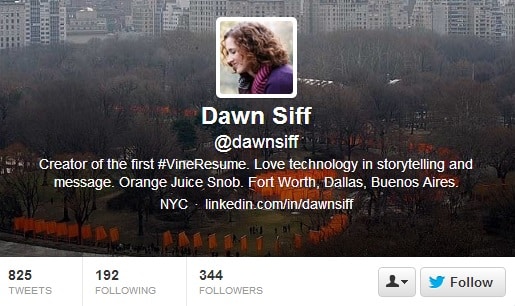 Well … congratulations all the same! Do you have a Vine resume?