by Melissa Stusinski 9 years ago8 years ago

The new Tumblr “Reasons My Son is Crying” has left thousands of people laughing — and saying, “Aww.” The Tumblr, created by dad Greg Pembroke, documents his youngest son’s temper tantrums.

The Tumblr page, which is less than a week old, went viral over the weekend when it was posted on Reddit by user lithiumflame. Each post shows the adorable one-year-old crying, along with the reason why. While some are understandable (at least to a toddler’s mind), like, “He dumped a full cup of water on his own face,” others are just plain cute (“He is in a giraffe costume”).

Pembroke spoke with TODAY.com about the new Tumblr. It seems that, despite being incredibly patient, a dad with two boys under the age of four is sometimes in need of an outlet. So, instead of letting his adorable youngsters get the better of him, the 32-year-old decided to document Charlie’s reasons for crying. Pembroke explained:

“Kids have meltdowns 20, 30 times a day. You can drive yourself crazy or you can laugh and just accept it. I think every parent experiences meltdowns and I was trying to have a little fun with it.” 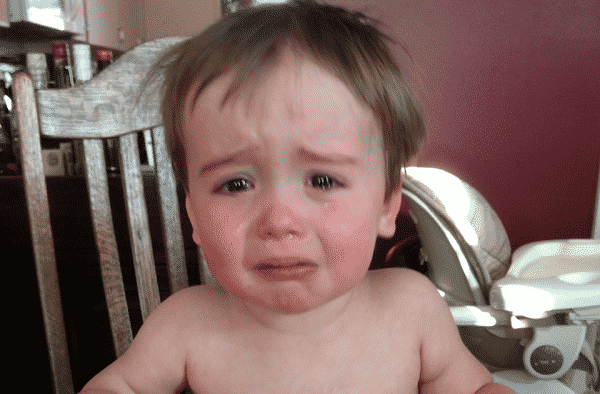 “Reasons My Son is Crying” was criticized by some Reddit users, though many other users agree that the idea is all in good. But despite the good intentions, the Tumblr page was not completely accepted on Facebook. Facebook appeared to be blocking users from sharing the link at one point on Monday, though the issue appears to be cleared up.

Pembroke is not the first parent to chronicle his toddler’s frequent tantrums. Jason Good’s 46 Reasons My Three Year Old Might be Freaking Out also includes explanations like “The car seat is weird,” “He’s not allowed in the oven,” and “His sleeve is touching his thumb.”

For more “Reasons My Son is Crying” photos, head on over to Greg Pembroke’s Tumblr.