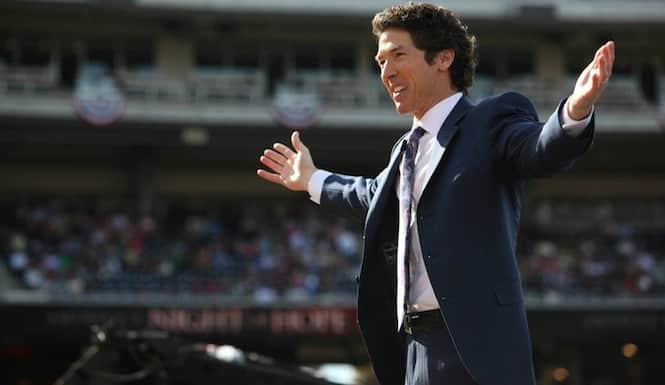 Joel Osteen, televangelist and senior pastor of Lakewood Church in Houston, Texas, reportedly left Christianity this week, citing waning faith in the infallibility of the Bible as God’s word. As millions of Christians scrambled for some concrete news on the subject, it was confirmed this morning that Joel Osteen’s crisis of faith was just a simple hoax.

The announcement originated from a sketchy WordPress blog (which spelled his name “Osten” in the url) but quickly gained traction on Christian forums. Osteen’s alleged statement read, in part:

“I believe now that the Bible is a fallible, flawed, highly inconsistent history book that has been altered hundreds of times. There is zero evidence the Bible is the holy word of God.”

The post was coupled with a YouTube video announcing Osteen’s resignation, which showed images of the story headlining CNN, Yahoo, and Drudge Report. Little problem. Those articles don’t exist.

While Osteen hasn’t released anything by way of an official statement (one commenter opined that he was more the type to show up “bright and early at Lakewood on Sunday morning and laugh” instead of speak to the media) he did just tweet something that pretty much confirms that he isn’t losing his religion.

Did you fall for the Joel Osteen resignation hoax? You can check out the original blog post here, or the faked video report below.

Together with the fireworks for the Independence Day weekend, the latest explosive Hollywood news involves no one else but the controversial Kanye West. The famous celebrity has revealed his plans for a presidential run. Originally planned for 2024, he has stated that he is actually going to run for the 2020 Presidential elections in November. The… END_OF_DOCUMENT_TOKEN_TO_BE_REPLACED

Recent trends have reported that K-pop fans in the US are getting mixed in with current issues in politics. K-pop fan communities are using online platforms to rally up and protest against racism in the United States. In support of the #BlackLivesMatter movement, the online K-pop community has come together in protest. Never has it… END_OF_DOCUMENT_TOKEN_TO_BE_REPLACED