Just in time for April Fool’s Day a fake Mila Kunis Facebook fan page post claimed on Monday that the actress was pregnant. The page also claimed that Mila was taking the next nine months off in Hawaii with boyfriend Ashton Kutcher.

It turns out the prank was part of an elaborate posting on behalf of Kutcher. We shouldn’t be surprised, after all Ashton Kutcher is the creator of the once popular MTV series Punk’d.

Shortly after the post received more than 21,000 likes the following message was posted:

We were waiting for the Facebook fan page to be taken down or a public spotting of Demi Moore crying into a Mimosa.

In any case the prankster (who we are not pretty sure was Kutcher) went pretty far, even showing off what appears to be two positive pregnancy tests. 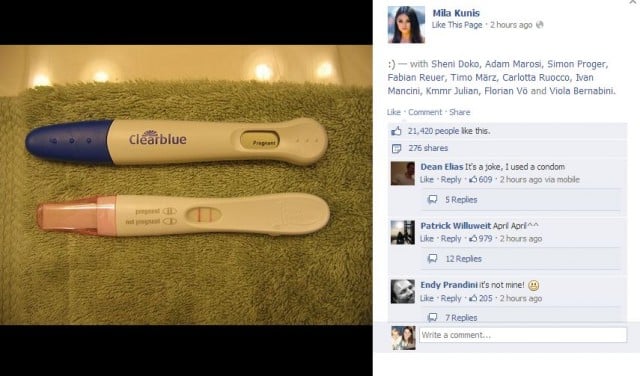