by Kim LaCapria 11 years ago8 years ago

Okay, it’s coming out of a weekend and it’s also a holiday, but does Fox News not have a social media coordinator?

Sometime around 2 AM EST on July 4th, the @FoxNewsPolitics account was compromised. The feed has since been populated with tweets regarding the “death” of President Barack Obama, reporting that the Commander in Chief was shot campaigning in Iowa. While the main @FoxNews twitter account- nearing 800,000 followers- has not been hacked, the specific politics one with over 34,000 followers appears to have been.

The @FoxNewsPolitics account appears to be verified, though we cannot locate any other sub-accounts for the news network. The tweets, in chronological order, read:

@BarackObama has just passed. The President is dead. A sad 4th of July, indeed. President Barack Obama is dead

@BarackObama has just passed. Nearly 45 minutes ago, he was shot twice in the lower pelvic area and in the neck; shooter unknown. Bled out

@BarackObama shot twice at a Ross’ restaurant in Iowa while campaigning. RIP Obama, best regards to the Obama family.

#ObamaDead, it’s a sad 4th of July. RT to support the late president’s family, and RIP. The shooter will be found

We wish @joebiden the best of luck as our new President of the United States. In such a time of madness, there’s light at the end of tunnel

No one has yet claimed responsibility for the hack, but some sites have speculated Anonymous affiliates were involved. 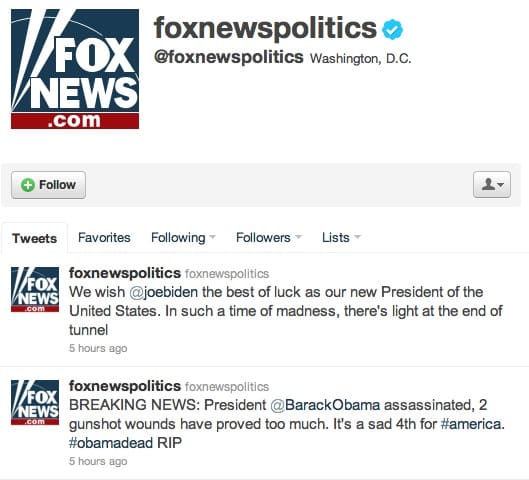 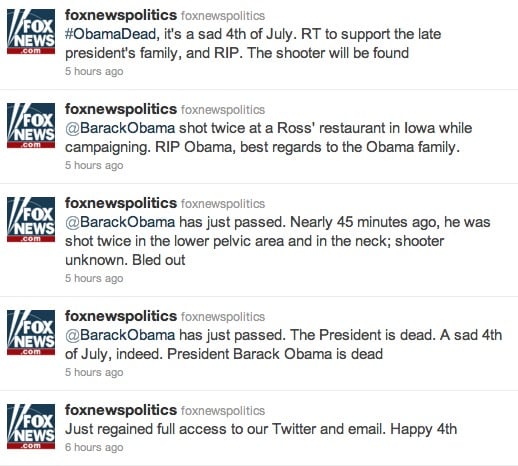