[Case Study] Anthony Weiner, Andrew Breitbart and the Politics of...

by Kim LaCapria 12 years ago9 years ago

Rep. Anthony Weiner, probably the most powerful rising star of the Democratic Party at this point, should not have been surprised to find himself the target of Andrew Breitbart’s truth-distorting poison pen- indeed, it’s only shocking it took Breitbart this long to drum something up. Breitbart, who owns and operates a conservative blogging collective, is known for his habit of snipping and clipping the truth to cause a giant drama and backlash, one that unfortunately tends to take down innocent people before the actual facts of the matter are ever examined. Along with his even-less-savory progeny James O’Keefe, the teablogger has felled powerful adversaries including ACORN, former USDA bigwig Shirley Sherrod and NPR.

Rep. Weiner, on the other hand, is a formidable foe for the likes of Breitbart, and not mealy-mouthed enough to cave under the pressure of a tale like this. To recap, Breitbart and co. allege Rep. Weiner tweeted a picture of his boxer-briefs encased junk to a fangirl in Seattle who has, in the past, called Weiner her boyfriend on Twitter. (This in and of itself is not damning, as I myself have referred to Rep. Weiner as my boyfriend on Facebook, and why didn’t he send me pictures of his wang?!)

To wit, as a handsome and witty young political dreamboat, many women across the country have jokingly referred to the Congressman as their boyfriends. No harm, no foul there, though Breitbartians are behaving as if the common quip is always to be taken as a statement of fact. Below, Exhibit A in the Weinergate scandal: 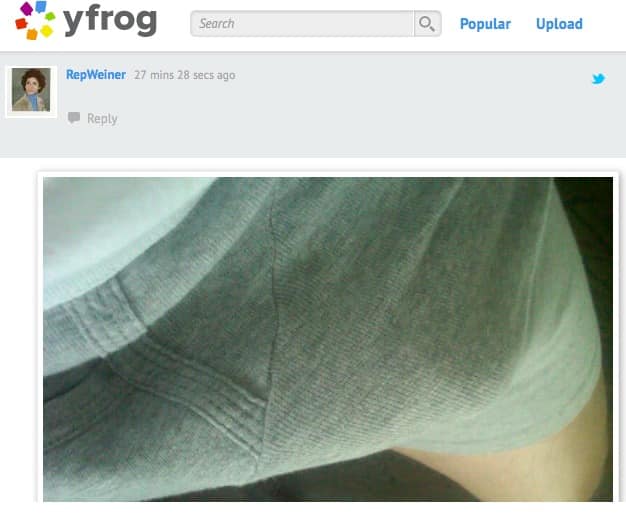 Since the story broke late Friday, Weiner has acknowledged it only to say that his Twitter and Facebook were hacked. Breitbart is hammering the Congressman as well as news sources he sees as left-leaning for ignoring the “scandal.” However, it should be noted that Breitbart has severe credibility issues with many political reporting sites due to his pitiful understanding of journalistic ethics.

So for now, the wankfest known as “Weinergate” is a bit of a question mark. It’s highly unlikely the passionate, well-liked Dem used Twitter as a way to seduce young women, and even far less likely he either accidentally or deliberately tweeted a picture of his wang. But even in its infancy, the brouhaha can teach us a few lessons about social media and how to handle a controversy involving your image or brand.

1.) Time is of the essence: We live in an era where communication is instantaneous on a huge scale. If something is blowing up in your social media bailiwick, that doesn’t mean you’ve got to spend an entire holiday weekend battling it- but try acknowledge the information as soon as possible and tell interested parties when you plan address it, no matter how outlandish the claims are.

2.) Level playing field is level: Big deal people hate this particular facet of social media, but it isn’t going away. Everyone has one voice on services like Twitter, Facebook and in the blogosphere, and once information is out there, ignoring it can cement it- even if it’s the total opposite of the truth and the source of information is less than trustworthy. Countless times, I’ve seen inaccurate information allowed to stand and then repeated, because it wasn’t refuted. Which leads me to…

3.) Be proactive: If someone is trash talking you on social media, or your credibility is being damaged accidentally or intentionally, silence will almost always look like guilt. As does flaming. Try to go to the source of the information, refute it, and state your case politely. If you’re a business, use that opportunity to display your sweet customer care skills.

Until Rep. Weiner addresses the allegations or Breitbart comes out with the “much more” he’s promising on the scandal, it will be difficult to weigh the case on its merits. Have you ever successfully prevented reputation damage using social media? How did you handle it?