by Dan Evon 12 years ago11 months ago

At the next Town Hall meeting, people will only have 140 characters to ask President Obama a question. The White House will be hosting a live Twitter Town Hall meeting / Tweetup on July, 6th.

If you want to ask President Obama a question, you can tweet it to the #AskObama hashtag. The most popular questions, as decided by Twitter’s curation tools and a group of Twitter users, will be asked by co-founder Jack Dorsey during the event. 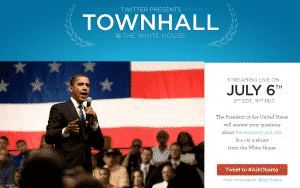 “Twitter offers a compelling way to not only get information out but also to understand what people have to say about an issue. That is why we are doubling down on our online engagement efforts.”

This won’t be the first time that Obama has used social media to reach a wider audience. Obama is a regular Youtube user, and earlier this year he held a Facebook town hall with Mark Zuckerberg. 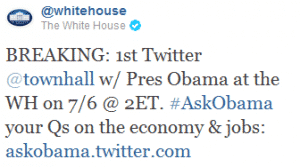 Anyone can ask Obama a question by using the aforementioned hashtag, and anyone can watch the event streaming live at askobama.twitter.com and whitehouse.gov/live. But if you want to attend the Tweetup, you should follow @WhiteHouse.

“A portion of the Twitter town hall’s live audience will be drawn from @WhiteHouse followers who have signed up online at WhiteHouse.gov/Tweetup.”

The first Presidential Twitter Town Hall meeting comes just 10 days after President Obama sent out his first tweet. The President is tweeting, all by himself, at @barackobama. (You can tell it’s him because he signs every tweet, BO.)