Facebook on Monday began offering its VoIP calling service for iOS Messenger users in the UK. The app is already available in the United States and Canada. The new feature does not even require users to download a new version of the popular Facebook Messenger app.

Last month was big for FB in terms of its Messenger app. When the social network rolled out its new feature in Canada it brought with it voice calling and messages support. Users were also introduced to a new ‘Record’ toggle that can be pushed and held to record voice messages. The record feature rollout was followed in the US with a free voice calling option.

Facebook VoIP calling is attempting to compete with Microsoft’s Skype by offering calls over both 3G and WiFi networks. The Facebook Messenger app allows users to call one another directly through Facebook, a move that immediately gave the company access to one billion FB users.

The Google Android version of Facebook’s VoIP service is expected to arrive in the UK several months after the iOS release, as it did in the United States.

VoIP integration is becoming a standard practice for messaging apps, in December Blackberry’s BBM7 also introduced voice-calls directly from inside the app. Viber is also working on voice-calling for its platform.

Accessing the new Facebook Messenger app requires both users to be ‘online’ within the app. Clicking on a users online profile will display an ‘info’ icon at the top-right corner. Click on the info icon and then choose the ‘Free Call’ option next to ‘Timeline” and you’re good to go. 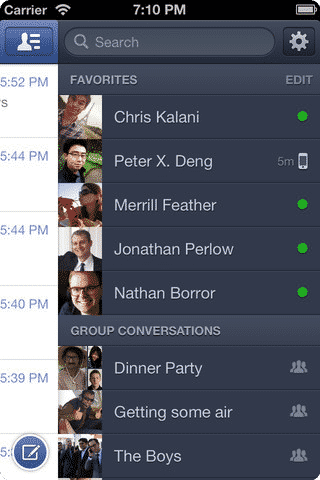