by Dan Evon 10 years ago10 months ago

Tom Cruise has gone where no major American celebrity has gone before: Vkontakte.

The international star announced that he had joined the Russian social network site Vkontakte on Twitter this weekend.

For non-Russian speakers, Увидимся там means “we’ll see you there” in English.

Cruise has only been on the site for a few days but he’s already collected more than 50,000 followers.

The actor, whose Team TC will run his Vkontakte site, has been using VK to promote his new movie Oblivion. The team has done a pretty good job promoting Cruise so far but they admitted that they are currently treading unfamiliar waters.

They posted a message that reads: “What do we need to know…Any tips for us? We’re new!” 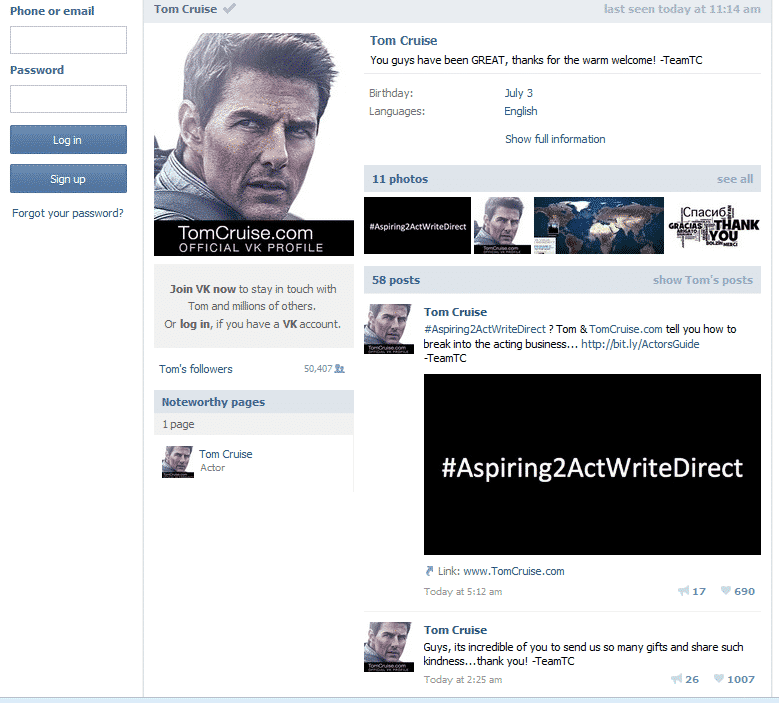 Oblivion will open in Russia on April 11, a few weeks before it lands in the United States. According to the Moscow Times, Cruise will be visiting Russia along with director Joseph Kosinski next month to promote the film.

Vkontakte reportedly has about 190 million registered users. One of the reasons it’s so popular may have to do with the fact that many of Cruise’s movie are available to be illegally downloaded on the site.

Do you think big stars will follow in Tom Cruise’s footsteps and join Vkontakte?