An extremely laid back dad has become a social hero over his response to overhearing his son’s plans to come out as a homosexual to his parents.

A letter posted to Facebook this morning by the pro-gay clothing and accessory brand FCKH8 is going viral as an inspirational example of acceptance from father to son.

Nate was on the phone with his boyfriend Mike expressing his fear and anxiety over coming out as gay to his parents. Nate’s dad overheard the conversation and left his son an encouraging note, remarkable for its nonchalance and nuanced sweetness.

Transcribed by Towleroad, the note reads:

I overheard your phone conversation with Mike last night about your plans to come out to me. The only thing I need you to plan is to bring home OJ and bread after class. We are out, like you now.

P.S. Your mom and I think you and Mike make a cute couple.

Gawker reports that FCKH8 has been flooded with media requests over the post, which they have been passing along to the family. Nate’s dad’s name was originally included in FCKH8’s post, but he requested it be removed because “they didn’t want to ‘make a big deal’ of it,” so the likelihood that the family will return the media’s calls seems unlikely.

Still, it’s an encouraging post, and its unexpected popularity prompted FCKH8 to release the following statement:

“We hope it sets a good example for father’s to love their kids the way they were born. The fact that it has been shared by so many sadly means that this kind of acceptance is both too rare and deeply craved by LGBT people so used to being rejected by families.”

Check out the letter, via FCKH8, below: 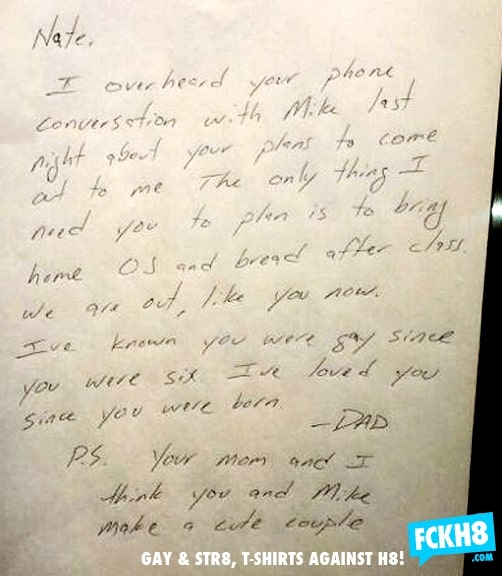