by Dusten Carlson 10 years ago4 months ago

Pop quiz, hotshot: What’s the best way to convince the world you’re not in the middle of a celebrity meltdown? If you’re Justin Bieber, posting a lengthy diatribe to Instagram about how you’re not Lindsay Lohan is a good way to start.

Bieber has been going through a lot lately, and despite the protests of his management team that “all is well” in Belieber-land, it’s pretty obvious that his celebrity star is wearing around the edges, and that cracks are beginning to form. We don’t say this to disparage the Biebs, or take anything away from his success. But hell, fame is tough. And that seems to go double when you get it all at such a young age.

But if there’s one thing Bieber is doing wrong, it’s that he’s defending himself. He used to just laugh at himself, but his critics have gotten to him. Hell, his own rabid fanbase has even turned on him a time or two.

The latest “Bieber defends Bieber” rant came about on his Instagram, in a lengthy post that starts by flipping his management team the bird and ends with “I’m not Lindsay Lohan.” 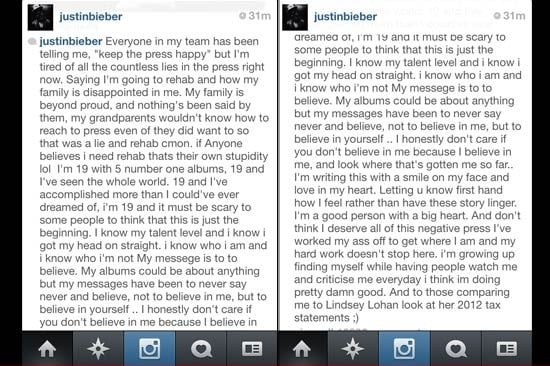 The “baby” doth protest too much?

In any case, Bieber quickly deleted the post. Maybe he just needed to get it off his chest or maybe his management team cracked the whip, but because this is the Internet, where everything is forever, his Instagram post is getting tons of press right now.

Ironically, it looks like the “negative” kind he criticized in the rant.

Come on, Bieber. What does Lindsay Lohan have to do with any of this? Stop trying to make “fetch” happen, dude.