New Pope Selected: Does This Mean That @pontifex Is Back...

The white smoke has spoken! Our new pope is Jorge Mario Bergoglio of Argentina, and he is the first pope from Latin America. He has chosen “Pope Francis I” as his handle, and while that’s really great news and all, we care more about the fate of his other holy handle: His Twitter handle.

I don’t care what anyone says, I still believe Pope Benedict quit because of Twitter. He tried his best, he really did, but he failed miserably at social media, with the most active of @pontifex’s 1.5 million followers checking in daily mostly to flame him. So now that we have Pope Francis I, will he embrace Twitter like his predecessor?

The Vatican has reactivated the Pope’s @pontifex Twitter account in anticipation of the election of a new pope today. Since the handle went into hibernation after Benedict’s retirement, it has grown to 1.6 million followers. 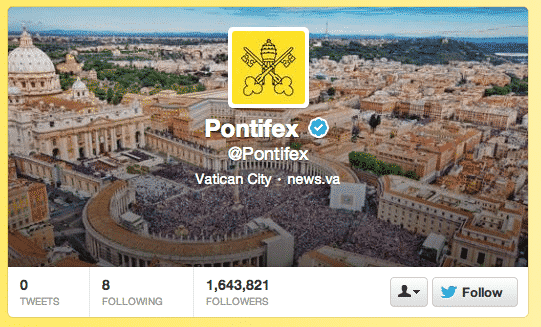 Pope Francis I didn’t have a Twitter account before being named as the new pope, and it’s unclear who will run @pontifex for him, but a mock-Twitter account in Bergoglio’s name has already gone live.

I have no idea what that means, but I hope it’s funny.

Predictably, Twitter is exploding with chatter about the new pope. As of right now, six of the top trending terms are related to Pope Francis I in some way, but my favorite is #ReplaceMovieTitlesWithPope.

#ReplaceMovieTitlesWithPope The Perks Of Being A Pope. Run Fat Pope Run. Evil Pope. Lord Of The Pope

Is this too obvious — Dead Pope’s Society. #ReplaceMovieTitlesWithPope

Sound off, readers! What do you think of the new pope?