Another day, another hoax. Facebookers beware of promotions from “Apple” and “Beats Electronics” offering “unsealed” hardware in exchange for “Likes.” These pages are apparent scams to build fan page numbers. 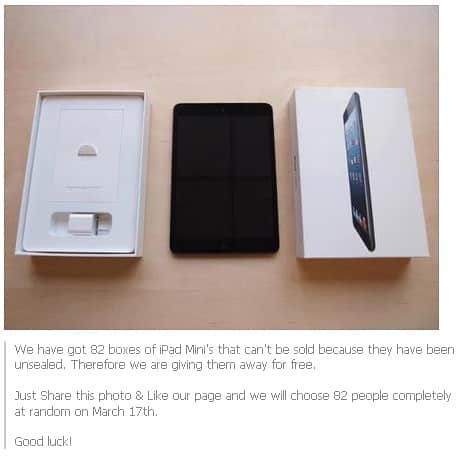 They’ve been popping up over the past several days, and as the post says, “Liking” the page will enter you into a random drawing for high-end headphones from Beats Electronics, iPad Minis, etc.

We have got 1,239 boxes of Dre Beats and 250 Monster Beats By Dr Dre Studio Limited Edition that can’t be sold because they have been unsealed. Therefore we are giving them away for free.

Want a pair? Just Share this photo Like our page and we will choose 1,239 people completely at random on March 15th.

CNET reached out to Beats Electronics for comment on the posts, and a spokesperson confirmed that they’re not behind the fake Facebook offers. They’ve contacted Facebook to get the page taken down.

The Apple page is incredibly sophisticated, with a banner and images of Apple products, but don’t get taken in by it. If you see an offer for “unsealed” Apple iPads or other products, this page is hoaxing you. 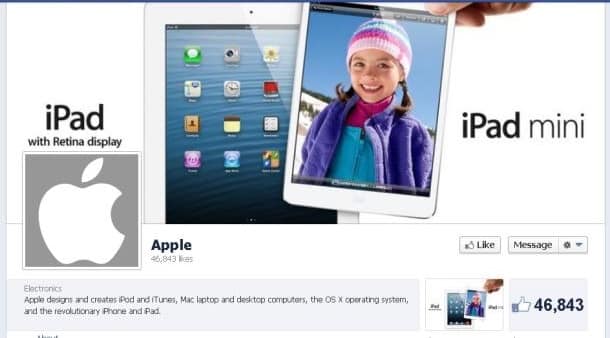 You can see that the page has already tricked some 46,000 people, none of whom will be receiving an “unsealed” Apple iPad.

The hoax was first reported by anti-scammers Wafflesatnoon, who believe that the promotions are meant to drive up fan numbers for pages, which will be renamed and sold with all of the fake promotion content removed.

Like we all learned with last year’s fake Powerball hoax, your “Like” or “Share” doesn’t cost you a single thing, but try to put your thinking caps on before you inadvertently encourage shady social behavior.