How Different Parts Of The World Use Social Networks [Infographic]

by James Kosur 11 years ago6 months ago

The Social Network culture has spread to just about every part of the world and while most users have access to the same type of functionality such as games, instant messaging, friend networks, etc. the way social network platforms are utilized in various parts of the world differs.

The grey bar represents “Active Social Networkers” while the pink is “Messengers and Mailers,” the blue is “Content Sharers” and green is “Joiners and Creators of Groups.”

The finding come from data that surfaced from February 2011 surveys and involved 750 to 2000 online users per survey.

You’ll notice that some areas were more focused on content sharing such as Asia and India, while other areas such as Canada placed more emphasis on sending messages.

Trendstream, the country that gathered the day used by Global Web Index also created a social network penetration chart which helps us better understand how penetration in any given market affects the type of user that market attracts. 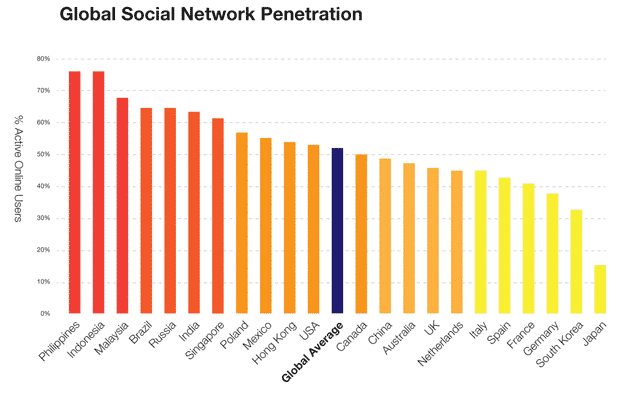